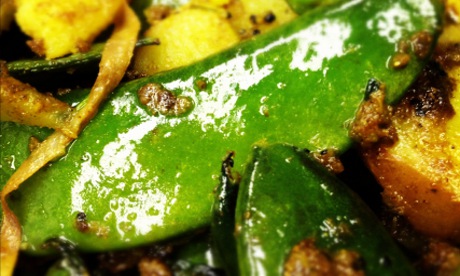 It looks like Dalston can’t get enough of a good thing, as the mother-and-son team behind Gujarati Rasoi double the size of the restaurant after less than a year in order to meet demand. Lalita and Urvesh Parvais have earned a name for themselves with the locals.

First with stalls at Broadway Market, then branching out to Borough and Exmouth Markets, they decided to launch the restaurant near popular night haunts the Vortex and Dalston Jazz Bar in November last year.

Now they’re doubling capacity; once complete, the restaurant will seat 50. Gujarati Rasoi focuses on traditional recipes with modern tweaks, serving up street food and traditional Gujarati meals that have been in the family for generations.

“My mother and I are all about the love of our food heritage and delivering it with respect for the ingredients and methods,” says Urvesh. “We’ve been turning people away on busy nights, so it made sense.”

He says the last 12 months have been tough, but fun. “People like what we do. We did a little flyering for the restaurant, but mainly I think it’s word of mouth. We’re becoming part of people’s life ritual in Dalston. It’s been a big learning curve. The past year has been lots of fun, hard graft and happy customers,” he says.