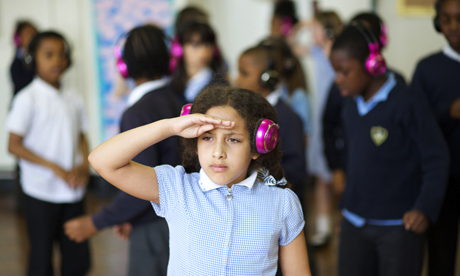 Children in Hackney were transported to Mars last month as part of a workshop that uses technology to spark children’s imaginations.

Now Press Play runs a workshop for seven to 12-year-olds every Friday in Workshop 44 in Haggerston.

The workshop uses wireless headphones to transform children into the main character in a series of themed stories, in which they meet people, discover places, solve problems and have an “educational adventure”.

The experience sees them bounce across the surface of Mars, plunge into the Water Cycle, learn about global warming or animal habitats, or explore the wonders of ancient Egypt.

Alice Lacey, co-founder of Now Press Play, said: “We start with a warm up and play some games and then they put the wireless headphones on.

“They are a main character in the story using their imagination and interacting with each other.”

Many children who attend live on Regents Estate in Haggerston, and workshop stories like last month’s ‘Mission to Mars’ gives them a chance for some escapism.

Ms Lacey said: “Even though they were in an estate in Hackney, in their minds they were jumping around Mars and looking for signs of life.

“Kids come and then tell their friends and bring them along next time.”

Now Press Play was founded in 2012 and runs workshops in Hackney and Tower Hamlets, as well as in Islington and Newham.

Ms Lacey says they are looking to expand into more schools in London to reach as many children as they can, and to hold more holiday workshops.

She said: “The main plus is it gets them to use their imagination. We are using technology but that’s only half the story.

“As most kids spend the summer staring at a computer screen, I think it’s important to get them imagining and thinking.

“Plus it encourages children to be creative and be independent learners.

“All of us have very different ways of learning. People don’t necessarily have one preference. I think technology is offering lots of different ways we can improve education.”

She added: “We have also been trying to run our Summer workshops outside, which means people from the local community can join in if they want to.”

← Laburnum Boat Club to celebrate thirtieth anniversary next monthShaky hands, shrieks and tears… It must be A-level results day →