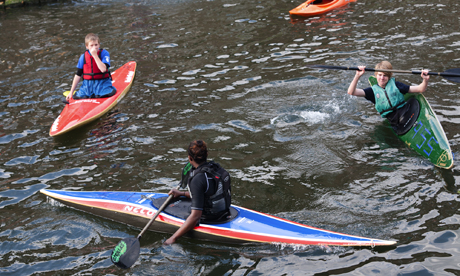 Stick your oar in: Youngsters take to the water at the Laburnum Boat Club. Photograph: Eleonore de Bonneval

Back in the dark ages – the 1990s and earlier – physical education meant running around a muddy field in the rain.

Now pupils are increasingly being provided with opportunities to branch out into niche sports as part of their schooling.

One such opportunity comes courtesy of the Laburnum Boat Club, which celebrates its thirtieth anniversary next month (September) and is conveniently located smack bang next to UBS-sponsored Bridge Academy in Haggerston.

The school and boat club have what the club’s senior youth worker Dom Hinshelwood calls a “mutually beneficial relationship”, but relations were not necessarily predestined to be so rosy.

Immediately prior to the school opening in 2007, there were fears the new academy could end up expanding onto land occupied by the boat club which was owned by the Learning Trust.

There were negotiations, and senior figures at Bridge Academy soon realised they had a fantastic resource on their doorstep.

Mr Hinshelwood says: “We’ve come out of this with a proper rent agreement for the first time ever, so we are quite secure here now. Our coordinator Jim Armstrong is on their Board of Governors and we have someone from UBS is on our Management Committee.“

Armstrong, himself a former teacher, and two other keen canoeists established the Laburnum Boat Club in 1983 on land that was at the time an old gas works.

The club runs canoeing sessions on Tuesday and Wednesday evenings as well as Saturdays and hires out narrowboats to schools.

It also runs a youth watersports training project allowing youngsters to get qualifications.

“We can train up young people to the point where they can be canoe coaches, swimming life guards, narrowboat skippers, and in first aid,” says Mr Hinshelwood.

As well as going canoeing as part of their PE lessons in Year Seven, Eight and Nine, Bridge Academy students use the club’s climbing wall.

Oaklands School in Tower Hamlets also uses the club for their GCSE PE, and the club organises classes on canal wildlife and pollution, which form part of schools’ biology lessons and which take place on canal boats.