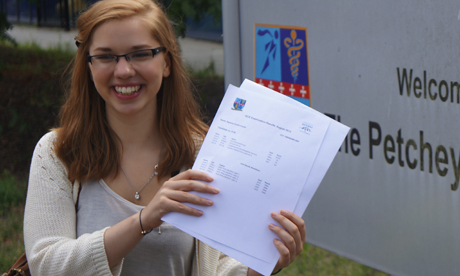 The wait was finally over for A-level students all over Hackney today as they flocked to colleges and schools to collect their results.

The champagne corks will be popping at Petchey Academy, where their very first batch of A-level students celebrated their hard-earned grades.

One very happy, if shell-shocked, student was 18-year-old Saoirse Purtill-Coxall, who is on her way to Oxford University to study history and politics at Oriel College after receiving results of A in government and politics, A in History and C in Philosophy.

“I came in with my friend to pick up my results and I was just nervous, everyone was really nervous,” she said.

She said the interview at Oxford had been extremely tough.

“I thought I’d done really, really badly, the politics one was horrific but somehow I’ve done it!” she added.

Miss Purtill-Coxall is the first in her family, and indeed from her sixth form, to attend Oxford University. She said her parents were very proud.

She is now planning a night out in the West End with her friend Zhane Gordon, 18, who also will be celebrating after earning herself a place at York University also to study history and politics.

The national rise in students tackling difficult subjects was reflected in Hackney students’ choices as many appeared to have opted for science and maths.

The Hackney Citizen spoke to two future architects, both of whom had been accepted into top universities.

Isaac Simpson, 18, from Stratford, applied to study architecture at UCL and was given an offer of AAB, one he easily surpassed with results of A*AA.

With grade A in further maths, Simpson will clearly excel at the more technical side of the degree, but he is also especially fond of the creative side, saying he “loves drawing”.

“I’m going to UCL to study architecture for seven years,” he said. “It will be long, but I guess you have to push yourself.”

His colleague David Adesanya, 18, from London fields got A*, A, B in his A levels, and like Isaac he will be going to study architecture and has been offered a place at Manchester.