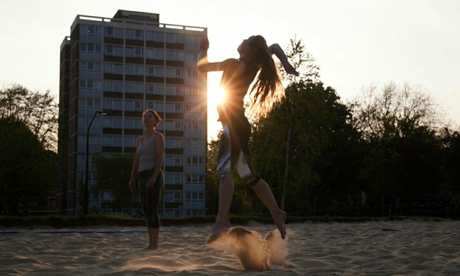 Hackney has everything except a beach, right? Wrong.

Actually there has been a beach of sorts in Shoreditch Park for 10 years.

It was constructed not so children could build pretty sandcastles but thanks to lobbying by the London Beach Volleyball Club, whose stalwarts rightly predicted burgeoning interest in the sport in the years to come.

During British beach volleyball season (roughly mid-April until September) club members can be found paying the sport in the park come rain or shine.

While they try to avoid playing in snow, the only time they will categorically rule out having a match is during electrical storms as the (albeit remote) possibility of lightening striking a player jumping up to wham a ball home renders this “too dangerous”, according to club chair Ellen Helsper, 36, a university lecturer who has been playing beach volleyball since she was 13.

And if you think that’s impressive, spare a thought for her grandmother, who regularly played indoor volleyball until the age of 85.

“This was the first purpose built beach volleyball court in London,” says Ms Helsper. “As a  club we’ve been involved in setting up courts around the city and now there are 16 or 17.

Ms Helsper, who is originally from the Netherlands but says she has lived all over the world, says beach volleyball has the potential to grow much bigger in the UK.

“If you talk about London there are now a lot of courts and there’s a lot of willingness to play,” she says. “Sport England is trying really hard to promote beach volleyball.”

The London Beach Volleyball Club now plays at four different locations but is still based in Shoreditch.

Every day they have training for players of different skill levels, male and female, from beginners to elite. On weekends the club runs social sessions when members can sign up to play.

What does Ms Helsper make of the somewhat misogynistic chuckles from certain types of laddish bloke whenever women’s beach volleyball is mentioned and jokes about how Boris Johnson must have been keenest on that sport during the Olympics?

“More than the misogynistic thing what bothers me is there have been a few people who have been saying that it’s not a sport and anybody can do it,” she says. “I would challenge anyone to just go and try because it’s really not that easy.

“People think about the physical side, and with indoor volleyball for example it’s really physical and you have to be really strong and jump really high, but the thing about beach volleyball is as well as being strong you also have to be smart.”

So much for lounging on the beach.

← End of an era? Mildmay Club ‘hanging by skin of teeth’Town Hall scraps plans for music gigs on Marshes after outcry →