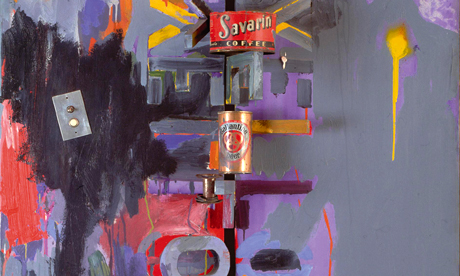 This month, the Barbican begins its season celebrating Marcel Duchamp and the influence his work had on art, music, dance, theatre and film.

The arts venue is inviting you to reflect on Duchamp’s impact on figures from several disciplines and his enduring ideas through a variety of exhibitions, performances and screenings.

The French artist revelled in busting the balls of the establishment. His work was unconventional and provocative.

The Bride and the Bachelors will feature Duchamp’s masterwork Nude Descending a Staircase (No. 2), which drew the critics’ ire at its 1913 unveiling, and the Bride painting from 1912.

Replicas of The Bride Stripped Bare by Her Bachelors, Even and a number of Duchamp’s ‘readymades’, including Fountain and Bottlerack, will also be on show.

The exhibition also boasts 18 works by Robert Rauschenberg and 17 pieces from Jasper Johns, many of which are making their London – or indeed, national – débuts. Both artists were greatly inspired by Duchamp.

Contemporary artist Philippe Parreno has created a soundscape, a dynamic experiential staging of the exhibition. In homage to the music of John Cage and the choreography of Merce Cunningham, two Yamaha Disklavier pianos will play live Cage scores, accompanied by the disembodied sound of dancers’ footwork.

Throughout the season, live dance will be performed by students and graduates from London Contemporary Dance School and dancers from Richard Alston Dance Company on Thursday evenings and weekends.

On the stage, actor Barry McGovern will be performing a black comedy, depicting one man’s struggle to understand the world around him. This is McGovern’s stage adaptation of the 1953 novel Watt by Samuel Beckett, who was a close friend and chess rival of Duchamp’s.

Cheek by Jowl, Artistic Associates of the Barbican, will also be performing a new French language production of Alfred Jarry’s Ubu Roi. Jarry, who pre-dates Duchamp, was at the centre of fierce controversy when the curtain first went up on this play at the end of the 19th century.

Cinema at the Barbican will also consider Duchamp’s legacy, illustrating film’s power to challenge aesthetic, political, sexual and ideological concepts. This season’s programme will include art house and avant-garde shorts, as well as feature length films and documentaries, exploring themes of irony and wit, irreverence and anarchy, the irrational and chance, the provocative and subversive – all associated with Duchamp and the wider Dada movement.

Duchamp divides opinion. The Bride Stripped Bare by Her Bachelors, Even, which is a portrayal of frustration, has the potential to frustrate the observer too. The same can be said of some of his other pieces, such as Fountain, in which life and art are indistinguishable.

For those who loathe Duchamp, these words from him might offer some slight comfort:

“I believe that the artist doesn’t know what he does. I attach even more importance to the spectator than to the artist.”

For those who love him, a Valentine’s visit may be in order.

The Bride and the Bachelors
Duchamp with Cage, Cunningham, Rauschenberg and Johns
14 February – 9 June 2013
Barbican

← Embracing the random – art on freecycleDecadence – The Transformation of Being: Marcos Juncal at Stour Space →