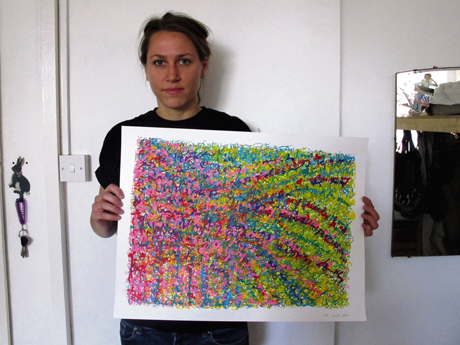 Freecycle, the online network for giving away unwanted household items, is a great resource for tracking down random objects for photo-shoots, films and art projects, and the things people give away also provide a snapshot of changing consumer tastes and technology.

Meeting complete strangers for brief moments and getting glimpses into their homes and lives is another intriguing aspect of Freecycle. It was partly these brief interactions that inspired me to offer up a series of my own drawings, produced in 2009 for an exhibition but never shown, to the Hackney Freecycle network.  Also, as the drawings reminded me of a period of a time of stress, I hoped the project would put them to good use in someone else’s home.

I posted stating that I was giving away some of my art work, linking to an album of all the drawings. What I asked for in exchange was an email giving their reasons for wanting that particular drawing and for them to pose for a photo holding the chosen image. I explained that the material gathered would become part of new piece of work, though at the time I had no idea what form this would take.

Very soon I had responses from a wide range of people, some long-standing residents of the borough and others from further afield. Hearing people’s reasons for wanting a drawing was a fascinating part of the project. Marcos and Mark were seeking art work for their home ahead of adopting a child. Sadie was reminded of her late brother by one of the drawings. Andrzej, who works for Ubuntu Arts group, a Bipolar Self Help Group in Waltham Forest, felt it would resonate with the group’s participants. Others, like Rachel, liked the idea of becoming part of another art work in some way.

Meeting the responders and taking the photos was probably the most enjoyable part of the project, though it was slightly bizarre at first to be inviting total strangers into my home and in some cases getting into long conversations.

Afterwards, many of the recipients kept in touch and sent me photos of the drawings installed in their homes. All the photos I received, as well as those taken in my room, are on Flickr, with the title – ‘The Risk of Being Alive’ – provided by Andrzej, as he reflected on “how a deliberate but random posting in Freecycle set in motion a totally arbitrary consequence”.

Erica Scourti is a Hackney based artist, filmmaker and blogger who works mainly with digital media. For more information visit: www.ericascourti.com

← Schnick Schnack Schnuck! at LimoncelloKeeping it surreal – The Bride and the Bachelors at the Barbican →