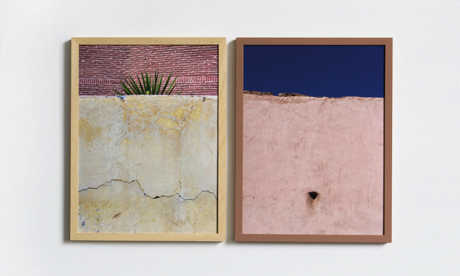 Working across a panoply of media, Baltes presents painting, photographic works, installations and anthropomorphic hybrids of all three, in an exhibition where even the walls and picture frames are self-painted in a curation of the whole.

The title of the exhibition comes from the German name for the game of ‘Rock, Paper, Scissors’, but this seems to be more than just a preference of nationality (Baltes is German herself), as the linguistic tripping of the German words schnick schnack schnuck is onomatopoeic of her painting style and visual personality too.

The exhibition has all the taunting psychology of its namesake, both in its seeming randomness and Baltes’ skill for the inconspicuous exploitation of her audience. She knows just when we’ll be ‘schnucking’ and when we’ll be ‘schnacking’.

There is pleasure and play sensitive to our most infantile senses. The joke is always light, just enough to push us to a giggle. Girl with a Pearl Earring is mounted on bubble-gum pink, her tactile painterly white hair revealing the fluoro orange of a stud.

Elsewhere the humour is less wry and sillier, Dangledoo’s papier-mâché and wool beads hang down from above the doorway just waiting for the sideways glance of our attention.

By far the cheekiest of works is Jim and Jill – two photographic portraits of landscape scenes made human in the framing. Jill brings her own sexiness into the mix, her rich pink belly softly dented by the shadow of her belly button. Even Baltes’ photographs reveal themselves to be graphically painterly.

The gallery’s Assistant Director, Rosa Tyhurst, speaks of Baltes “expanding painting”. It is certainly true that her work refuses to be contained in a single frame. The necklace of Discoteaser hangs from the awkward space between wall and ceiling to let the starry pendant rest on canvas-cleavage, while Ghost Owl stares out at us from the black painted wall behind the work, its eye-sockets incised holes in the canvas. In fact there are eyes everywhere – lines, slits, marks, brush strokes – which offer the unnerving sense that from the surfaces of 2D canvases, a whole woodland of animals might one day creep.

Baltes trained as a graphic designer, and the exhibition does read like a children’s book, cut out and reassembled in 3D – its characters and colours, the hide and seek of identifying the anthropomorphic in visual signifiers, and the Joycean linguistic pleasure of naming the Dangledoo, Ding Bats, and Discoteaser. This is a story book that is jumping and leaping through newly invented games.

Baltes’ graphic design background is stamped clearly on the work – in style, sign and symbol, the soft colours designed for printing, and the perfectionism of detail. This brings her humour to the fore in a fresh way. There seems to be no obligation in the choices she makes – the rules are all her own. Stylised and sharp, Schnick Schnack Schnuck! is an enjoyable show, making a game out of the verbal and the visual.

Open Thursday-Saturday, 11am-6pm and by appointment