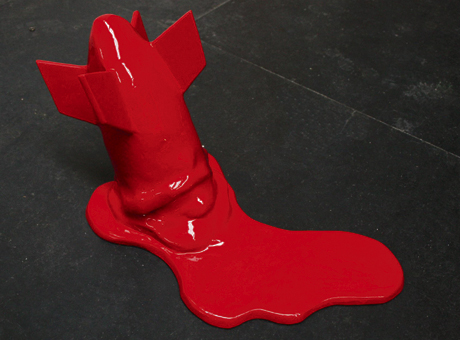 To take one look at Marcos Juncal‘s portfolio you might think he had come out of the womb sporting a dip-dyed afro and Lady Gaga heels. In fact, Juncal grew up in Galicia, Spain, where he experienced a somewhat more monochrome childhood.

After discovering comic conventions, all things sci-fi, the David Lynch film Eraserhead, and amassing a collection of cult club merchandise, Juncal rebelled against his Castro cultural youth with an explosion of plaster and PVC.

Cross-species Barbie dogs, a life-size Spiderman and absurd Rubik’s Cubes held by golden geishas are all part of his latest exhibition, Decadence – The Transformation of Being.

Last year, in his show at the Vyner Street Gallery, Juncal displayed huge yellow, blue and red missiles, which also form part of this new exhibition at Stour Space.

The artist’s most recent work is more sculptural, veering from tense and moody to stark and shocking. “I am delighted to reveal my new work here. It’s time to knock on doors and ask who’s coming out to play,” Marcos said.

Stepping out of Hackney and into Juncal’s surreal fantasy world means venturing to a place where sarcasm, irony and grotesque imagery run supreme. The venue has been converted in to a creepy yet colourful collection, resulting in memories of fantastical creatures and extinct circus art.