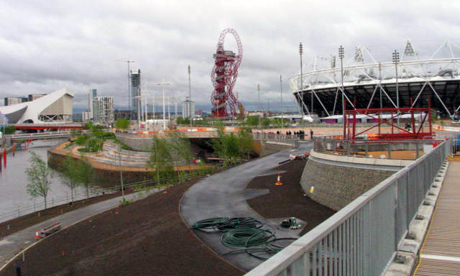 Free bus tours of the Queen Elizabeth Olympic Park site have begun, giving the public access to the Park for the first time since the end of the Paralympic Games in September.

With work underway on the £300 million project to transform the site through new housing, leisure facilities and businesses, the London Legacy Development Corporation have launched free bus tours around the site. Booking is prioritised for those from local boroughs and demand has been very high so far, with few spaces left before Christmas.

Dennis Hone, Chief Executive of the London Legacy Development Corporation, said: “We know there’s lots of interest in what is happening to the Park and we want to make sure people can get on to the Park while it is closed and hear about our great plans. This is especially important for those people living closest to the Park who have lived with the on-going construction on the site.”

All those leading the tours are from the local area. Speaking to the Hackney Citizen one of the guides, Pearl Saunders, said feedback had been very positive: “They’re so enthusiastic, much more than on the pre-Games tours, and there’s such a buzz. This has such a long tail. The question is: can you get people excited? But we do seem to be doing it.”

Speaking after completing a tour, Rosalie Hirst from Walthamstow expressed her enthusiasm for what is happening on the Park site: “It’s fabulous, it has changed a lot. We’d like to do it [the tour] again and sit on the other side of the bus”. After considering a move away from Walthamstow prior to the Olympics, Ms Hirst said she was glad she stayed for the Games and would now like to get even closer. “I’d like to live here,” she told the Hackney Citizen, “I’ve put my name down.”

The park will re-open in phases running from July 2013 until Spring 2014 with the first phase of the Park due to be opened on 27 July 2013, a year to the day from the Olympic opening ceremony. By that stage the temporary venues, seating and walkways will have been removed and new roads and bridges will connect the local communities to the Park.

This initial phase will include the Park’s first housing development of 2,818 homes in the converted Athletes’ Village. A year on from the start of the Games, the Copper Box will be the first of the major venues to re-open. The centre, which hosted handball and fencing among other sports, will retain its multi-sport facilities as well as a gym and exercise studios.

The velodrome and BMX track will form part of a new VeloPark timed to open at the end of 2013 along with tennis and hockey facilities at Eton Manor. In the final phase, through spring and summer 2014, the Aquatics Centre and Stadium will open, at which point tenants will begin moving into the Press and Broadcast Centre.

The scale of the transformation project is demonstrated by the number of people working on the Park site over the next 18 months. The estimated peak number of workers will be 10,000 which is equal to the maximum number on site during the construction phase.

The free bus tours run until July 2013 with tickets being released in phases. Tours can be booked by contacting parktours@springboard-marketing.co.uk  or calling 0800 023 2030.

More information on the Queen Elizabeth Olympic Park project is available at No Ordinary Park.