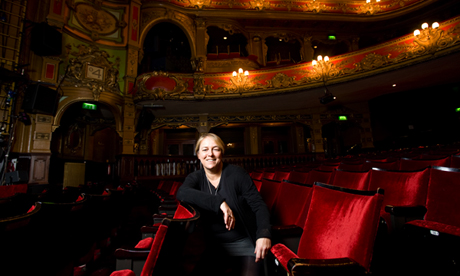 This year Dick Whittington and his cat have taken to the stage at the Hackney Empire, for what is regarded as one of London’s hottest pantomime tickets.

Without enlisting the help of soap stars or reality TV rejects, the Empire’s pantomime has, over a relatively short period, blossomed into a seasonal staple – and not just for locals.

Whilst credit for this belongs in many quarters, no one deserves plaudits more than Susie McKenna, who, for the past 14 years, has been writer and director of the annual gag-fest.

Rehearsals are at an advanced stage when we meet, with McKenna energised and enthusiastic as she leads me through the theatre. “I don’t think it’s blue enough”, she tells one of the painters after a whistle stop inspection of the scenery.

We walk on stage and look out at empty seats, soon to be filled with screaming children and adults. “It’s cool, isn’t it?” she offers, in hushed tones. “It feels more intimate than anyone would think.”

McKenna comes from theatrical stock. Her parents were in variety, and from an early age she travelled around the country with them, performing on stage. Aged 19 she landed her first leading role in pantomime – coincidentally as Dick Whittington.

Before 1998, McKenna was performing in the West End, directing shows at the Empire on a freelance basis. In those days, the pantomime was independently produced. “It was my idea to start an in-house pantomime, to create a show that was Hackney Empire’s own, Hackney’s own, and more broadly London’s,” she tells me over a coffee. However, it wasn’t until later on that ‘the crits’, as she fondly calls them, started to take notice.

“Between 1998 and 2004 we were the underdogs; the big newspapers didn’t even know we existed,” she recalls. “Then, in 2004, Sir Ian McKellen was playing the dame in Aladdin at the Old Vic.

“Clive Rowe had been our dame since the start, and that year we were doing Aladdin too. We thought it was a little unfortunate to have two Aladdins in London, and that everyone would go to see Ian McKellen.

“But what happened was that the critics decided to see both and to compare them. With no disrespect to Ian McKellen, we came out rather well! It was the beginning of London as a whole knowing about us, and the best thing that could have happened.”

As McKenna talks about the writing process, the notebooks she fills with snippets of overheard conversations and the jokes adapted from her favourite television shows, she appears as animated as one of her own characters.

She boasts about never killing the baddie, saying that kids already see enough violence in everyday life: “For me, there’s always redemption at the end. It’s not heavy-handed, but I think it’s important.”

She also speaks out against commercial productions that rely on the pulling power of celebrities, declaring: “For me, pantomime is not about star turns, it’s about story-telling and it’s about young people’s first experience of theatre. The star of our show is the show itself. There’s no point bringing in the punters if the show’s not very good.”

This year’s show is regarded as the true London panto, and the only one based on a real person (although there is no evidence that the real Dick Whittington had a cat). Richard Whittington was four-time Lord Mayor of London, and it’s this connection with the capital that influenced McKenna’s decision to stage the pantomime in this of all years.

“It worked out very well that in our cycle of shows we were hitting on Dick Whittington during one of the most exciting, celebratory years for our city,” she points out. “I’m trying to make the show a revisit of the year, so for the adults there are news stories or gags that will just reflect what’s happened.”

The big news in 2011 was that Clive Rowe, the Hackney Empire’s much-loved dame, was taking the year off, instead starring in a West End production of The Ladykillers. The solution was to stage Cinderella, which is famously dameless.

A year on, though, and the actor’s mooted return has not materialised, leading to a Hackney Empire début for Steve Elias as Dick’s mother, Sarah the Cook. McKenna is clearly excited at the prospect of her ‘débutante dame’.

“He’s a wonderful West End comic actor, he’s got a great voice (he’s a Welsh tenor) and I think he’s a lot of fun,” she says, selling his qualities. “He was an obvious choice because he sings and dances. I always like dames to sing and dance, whereas in other theatres they don’t necessarily – they’re there to be the comic.”

McKenna is keen to champion young and local theatrical talent. It was 2007 – another Dick Whittington year – when youngsters from Hackney Empire’s Artist Development Program were first used in the show.

In 2012, alongside their growing stock of emerging artists, pupils of Leyton-based dancing school X7eaven and participants of the Discover Young Hackney’s Alter Ego talent show will make up the villainous King Rat’s crew. Best of all, though, is that for the first time one of the program’s graduates is cast in a principal role.

“Bradley Cumberbatch, who’s playing King Rat’s sidekick, started with us when he was 13,” McKenna says with obvious pride. “He wants to be an actor, and he is now an actor, but he went to university and trained as an accountant. The minute he could he came back and I’ve managed to give him his professional début!”

McKenna talks about a ‘new generation’ of pantomimes in London, with theatres like the Lyric in Hammersmith once again embracing the genre.

For her, though, it’s all about Hackney. “It’s the most wonderful audience to write for”, she beams, “because it’s multicultural – it’s a London audience and I’m a Londoner. It’s so much more exciting to do it in a place like Hackney, much more interesting than writing for the Old Vic, where it’s full of 50-year-old middle class men.

“In the West End there are certain theatres where it just couldn’t happen.”