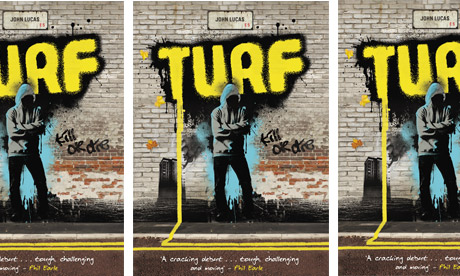 “In Hackney – the kind of Hackney I know – getting your education on the street is what matters”.

This is the premise of John Lucas’s teen novel Turf, set largely in the borough’s estates, chicken shops and alleyways.

The novel’s protagonist is sixteenyear-old gang-member Jaylon, who is on the verge of graduating to the ranks of the ‘Olders’.

The world of Jaylon’s Blake Street Boyz is a narrow one. On the one hand the gang brings comfort and security.But as Jaylon begins to discover, this ‘business’ is one that also obliges and constrains, and it is not long before he is faced with the task of killing a classmate.

Though certain elements of the plot may strain the imagination, Turfis a gripping account of a youth’s gradual realisation that the very thing he believed afforded him freedom is actually a prison from which there are few escape routes.

Lucas’s debut novel challenges the stomach and chills the mind. The Hackney-based writer draws a deft picture of a world that is physically close but normatively obscure to many of us.

The spiritual motifs with which Turf is laced provide an appropriate counterpoint to the values of the gang world Jaylon inhabits.

Notably absent (or irrelevant) are the institutions of school, law enforcement and social services. Even the primordial institution of the family is fractured, as Jaylon has been sent to live with his obsessively religious aunt due to the risk his mother believes he represents to his younger brother.

As the narrative unfolds, the tension rises and one cannot fail to be drawn along to the cautionary tale’s inexorable end.