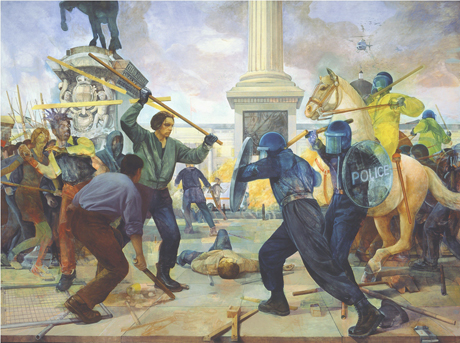 Painter John Bartlett lives and works from his first floor flat on Green Lanes. His painting depicting the 1990 poll tax riots was snapped up by the Museum of London, where it remains in the permanent collection, and was also turned into a London Underground poster.

In 2009, in a bid to generate some funds from his artwork, he turned his flat into a temporary venue and affectionately – but controversially – called it Tate Newington. A Tate collector showed up and shared the gallery’s dismay at their name (and logo) being used by Bartlett.

But the then-chief curator of the Guildhall Art Gallery, Vivienne Knight, also turned up and fell in love with Bartlett’s imposing canvasses depicting scenes of everyday life in London, which have been morphed or censored in some way.

Knight invited him to exhibit at the Guildhall, hailing it as a mid-career exhibition, though it is really a retrospective as he is exhibiting all 60 of the works he has composed over the past 20 years. It opens on 12 October.

“I take everyday scenes and approach them in different ways,” he explains. “I don’t want people to think I’m just making pastiches – so I’ll paint a landscape but then add something unexpected.”

An example is Man and Flea, a portrait of a homeless man lying down with an orange blanket draped over him in a style reminiscent of Titian. Bartlett has then added a human-sized flea onto the man’s back, street-art style.

Bartlett trained at the Maidstone Art College, where he was introduced to contemporary art practice, then later studied at the more classically-inclined Royal Academy. It was at the latter that he fell in love with the renaissance painters and learned traditional techniques – but influences from both institutions prevail in his work.

He uses his observations of the darker side of London in his paintings (“I’ve seen five shootings out my window with my three-year-old son”), embedding political messages which he hopes will inspire debate. “I want to people to be shocked, or enlightened – to have something to talk about.”

The 2011 London riots were the inspiration for an on-going work that he will continue to add to throughout the Guildhall exhibition until it is nine feet high and 25 feet wide. It will then be painted over.

“It’s about the process rather than the final product,” he says, “and this is what happens in real life: an event occurs and then we just forget about it.”

John Bartlett: London Sublime is on at the Guildhall Art Gallery from 12 October to 20 January 2013.