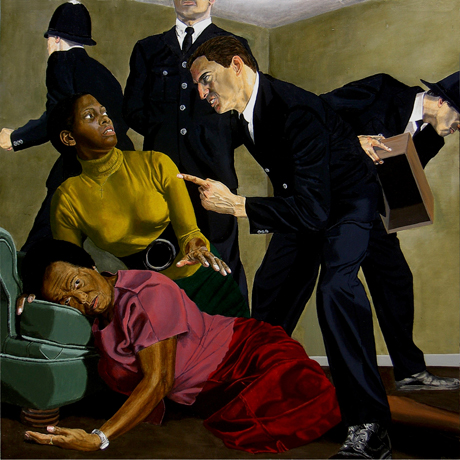 On his first night in London Kimathi Donkor, aged 19, was walking down a street in Brixton when he was stopped by the police. They said they needed his help with some enquiries and took him to the station, where he was interrogated.

It was the mid-eighties and not uncommon, says Donkor, for black youth to be arrested and detained with no palpable allegation.

“I’ve been detained several times since then. It’s a joke. ‘Helping with enquiries’ is a common, ironic phrase meaning someone has been arrested. They say ‘so and so is helping with police enquiries,’ and it’s a euphemism for being interrogated.”

Donkor had moved to London to study art at Goldsmiths. He chose to use his harrowing experience to inspire a disturbing self-portrait Helping with Enquiries 1984, 2005 – in which he is naked and being attacked by a policeman.

This piece is currently hanging in the Iniva Gallery, Rivington Place, as part of Donkor’s exhibition Queens of the Undead.

The three portraits on the first floor pay homage to Stephen Lawrence, Joy Gardner, Jean Charles de Menezes and Cynthia Jarrett: four people whose deaths were considered to be connected with race issues and all of which prompted investigations into the Metropolitan Police.

“Stephen Lawrence’s death was not properly investigated,” explains Donkor, “and it was a watershed moment when the police force eventually admitted it was institutionally racist. Hard to say if that’s a good thing or a bad thing – good that they were able to acknowledge the problem, bad that the problem existed.”

Donkor leads me through the gallery, explaining the beguiling narratives that weave through his portraits. He is calm, cool and eloquent – a captivating story-teller. But the stories are not made up, they are taken from real life, and Donkor is acutely aware of this.

“Jean Charles was actually a close neighbour of mine,” he admits, “lived 100 metres from me, and the person the police were looking for probably looked more like me than Jean Charles – so there’s this notion that it could have been be.”

Donkor’s portraits are intricately detailed. This is because, he says, he has a “strong affinity with these people, the way the state interacts with communities seen as other or migrant, so the detail is a way of generating empathy with the subject of each painting.”

“The reaction of the authorities is to claim that each incident is isolated and nothing to do with anything else. But one of the central aspects of my work is memory. If you have one – you will start to see a pattern.”

Donkor grew up in rural Dorset, “an idyllic life,” he says, “but lots of hard work too”. His family was involved in agriculture. He had a Christian upbringing; “attended a religious school, got sent to Sunday school.”

“Christian imagery and literature had a strong effect on my early life,” he explains, “but I’m not a church-goer now.” Biblical references, however, continue to appear in the titles of his works, as well as in the narratives.

In his painting Johnny Was Borne Aloft By Joy And Stephen, 2010, Donkor has depicted Jean Charles de Menezes being carried to heaven by Stephen Lawrence and Joy Gardner.

As with all his portraits, friends have posed as models, so Joy and Stephen are only recognisable because of the title of the piece.

“Stephen and Joy are guardian angels taking up the soul of Jean Charles, perhaps not guardians – it’s too late by then – but perhaps the scent of an afterlife.”

In the ground floor gallery, Donkor’s paintings of powerful black women throughout the centuries are displayed on metal stands – “They’re more like objects,” he says, “so you can walk around them and read the narratives on the back, which put them into context.”

In this painting When Shall We 3? (Scenes from the life of Njinga Mbandi), 2010, Njinga Mbandi, a 17th Century southern African princess is sitting down opposite a white, male European governor. Instead of sitting on a chair like he does, she sits on the back of a white woman.

“The governor attempted to intimidate the princess by telling her to sit on the floor in front of him, and she responded by getting one of her servants to act as a seat,” explains Donkor, “this immediately transforms the power dynamic of the meeting. She steps from being a subordinate character to taking a dominant position.”

The white woman/stall in the painting is a friend of Donkor’s. “With these paintings I’m working with people and places who are very far removed from our life, centuries ago. Somehow I want to bring them closer to create an environment for the viewer where they can approach these figures.”

In another piece, Nanny’s Fifth Act of Mercy, 2012, based on Nanny, a revered historical figure in Jamaica, a European woman cowers below the powerful Nanny, hands in prayers, and a white man lies dead at her feet.

“The common discourse is that black people, in terms of servitude, are servants of white people,” Donkor says. He is subverting this stereotype in these two paintings. And it is powerful.

He discusses his diverse cultural heritage and why he has made this the subject of his exhibition – “the people of Africa, the Caribbean, people from these parts of the world who settled in Britain, they’re important to my heritage.”

But why the focus on females? “’Why’ is a difficult question for me, as a practitioner, but I know what I’m doing. I want to bring these particular heroines to the foreground. For me, they’re people I’ve grown up with, but I understand they’re not widely known so it’s wanting to generate that environment myself – I want more of this imagery to be available to me.”