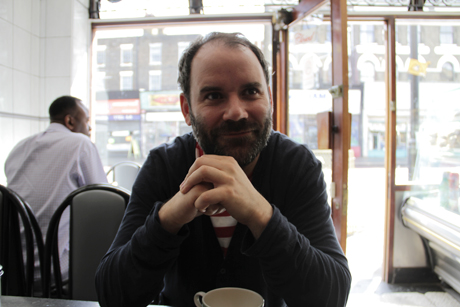 Starring Cavan Clerkin (Pierrepoint, The Shadowline), it documents the demise of David, a middle-aged man whose faltering relationship with his wife and general lack of motivation sends him spiraling into a dangerous criminal underworld.

Written by Clerkin and directed by Pascal Bergamin, the film is a ‘byproduct’ of the Sunday Film Club: a group of professional actors, directors, editors and camera operators who form a democratic ‘ego-free’ filmmaking collective.

I met Clerkin at Arthur’s Cafe, an old school Hackney haunt on Dalston’s Kingsland Road that he used to frequent with his grandad (he was born and bred in the area) to talk about the the film, which is based on his own life experience.

After moving to the Canary Islands with his wife a few years back, Clerkin was commuting to London to do acting jobs and suffered “a bit of a mid-life crisis.”

“I was coming back to London and getting pretty drunk,” he says, “it was about having my first son, feeling guilty about leaving my wife alone a lot…”

When Martin Askew, his old friend, and a writer who is part of the Sunday Film Club, came up with the idea for a short film about a night in the life of a man who has committed a terrible act of violence, Clerkin played the main part.

“We shot that, got back and it looked so beautiful and the colours were so rich that we decided to go away and write about who this guy was and what got him into these circumstances,” explains Clerkin.

Able to relate to the character, Clerkin came up with a detailed plot and he and Bergamin decided to extend the short to a feature film. They had a budget of £8,000 which, Bergamin says, means “you get quite inventive. It was liberating and inspiring.”

In Nice Guy, the central character David has a close relationship with his son. They cast Kiko, Clerkin’s 3-year-old son, as Ray: his son in the film. “We wanted the audience to feel that closeness.”

Bergamin says that working with a mix of professional and non-professional actors, as well as Kiko, was a challenge. “Every actor has different needs or ways of working but I have never had such a mix of individual needs before,” explains Bergamin, “this variety made the film very interesting to direct.”

David gets embroiled in a seedy after-dark world of strip clubs and criminals and though he didn’t slip into such darkness himself – Clerkin can see how easy it could be for things to go that way.

“Growing up in Hackney, we aspired to be like these gangsters around us – like the Krays. But acting saved me. We met these amazing guys at Hoxton Hall, went in to nick their camera and they gave us one – we couldn’t believe it.”

The 18 year-olds used it to make a “gangster, ninja epic feature film,” and this is what later drove Clerkin to make Nice Guy. “I knew if we could do it then – we could do it now.”

The aim was to produce an anti-gangster film. “We didn’t want to glamourise gangsters. It is a cautionary tale – I mean, people really suffer and that’s what we wanted to say.”

“We wanted a real rawness,” he explains, “so I wrote the plot and then we did workshops and the actors mostly wrote their own lines. Some of them chose their own names – they really ‘owned’ their characters.”

Halfway through filming, Clerkin realised that the crew thought his wife in the film, Hanna, must be based on his wife in real life, Ana Monzon, who produced the film.

“It suddenly dawned on me and I was like, I’m really sorry, I didn’t even think about that. And she was like, yeah – didn’t you wonder how I felt?”

At one point, post-filming and after the birth of his second son, Clerkin suddenly felt that he’d overcome his period of darkness and he wanted to change the ending.

“I needed there to be light. It could never be a really happy ending but I tried this new ending and Pascal was like, are you joking? It just doesn’t work. He was right. We had to use the first ending.”

With his usual roles being comedy-based, Clerkin was keen to venture into something more “dark and serious” but said that at the premiere “I was gripping onto my seat thinking, oh my God, what have I done; this is so dark.”

They have yet to secure a distribution deal and continue to plug Nice Guy for screenings at festivals. “You have no idea how much goes on behind the scenes with filmmaking – you make the film and it’s only then that you have to really start working hard.”

Clerkin and Monzon are, at the same time, quite keen to leave the film behind. “It’s dark,” says Clerkin, “and now that period is over so we just want to get on with our lives. I poured my heart into the film.”

For more go to Nice Guy The Movie.

← Hackney: An Uncommon History in Five Parts – reviewAttention all filmmakers – win £1,000 in One Shot Movie competition →