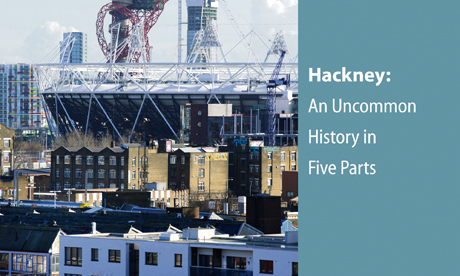 Did you know that Homerton was a favoured retreat for the aristocracy in the seventeenth century? Or that Kingsland Road/Stoke Newington High Street is part of the ancient Roman Road to Lincoln?

Published by the Hackney Society as a means of commemorating the Olympic year, Hackney – An Uncommon History in Five Parts is written “to entertain not only those who live in the borough or are familiar with its great variety of people and places, but also those who are brought here for the first time with the events of the Games.”

The narrative is composed of five snapshots of the borough at hundred year intervals starting in 1612 and ending in the current year.

Each chapter is penned by a different author, though the whole has a coherence that is sometimes difficult to achieve in a work written by diverse hands.

The volume charts the social change down the ages of the borough’s three principal parishes – Hackney, Stoke Newington and Shoreditch. Being located just outside the city walls, Shoreditch has always been known for slightly dubious pursuits – from ‘decadent’ Shakespearian theatre in the 16th century to prostitution, ale houses ad slums in later years.

Hackney and Stoke Newington, on the other hand, were in the 16th and 17th centuries leafy rural villages where the upper orders had sumptuous summer houses. Gradually as the population expanded over the ages, so the areas became less exclusive and more plebeian, before in the 19th and 20th centuries largely giving way light manufacturing – especially furniture, textiles and latterly the arts.

The book charts the various traditions that have made the borough famous – the string of dissidents who have been associated with these parts, from Daniel Defoe and Mary Wollstonecraft to the Suffragettes; the borough’s willingness to receive immigrants from all corners of the world; and its notoriety as site of crime – from the antics of highwayman Dick Turpin in the 18th century to Clapton’s Murder Mile at the turn of the 21st.

We also discover that the borough’s chronic housing shortage and transport problems have a long lineage. In 1912, 385 thousand people inhabited the area now included in the borough – approximately 150 thousand more than live here now.

Entertaining and engagingly written, this is a popular history bereft of endless footnotes (though a further reading section is provided at the end for those interested in delving deeper). The tone is light and colourful, whilst at the same time retaining a sense of authority. The volume is also well-presented with numerous illustrations.

It is unclear how many copies will fall into the hands of Olympic visitors, but locals will certainly welcome this book as a valuable addition to our understanding of the borough.