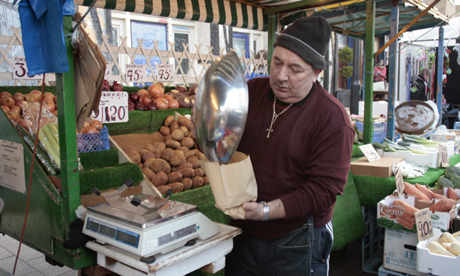 Tony the greengrocer on his stall, Broadway Market Photo: © The Hackney Citizen Ltd

Bosses at Sainsbury’s have been branded “like vultures” after the supermarket giant applied to open yet another branch in Hackney – this time a stone’s throw from the independent retailers of Broadway Market.

The Sainsbury’s Local store could open before Christmas after an application was lodged with the Town Hall for permission to sell alcohol at the premises on the site of an old shoe factory in Mare Street.

Sainsbury’s said it believed the new store would be a “positive addition” to the area, adding that it would consult residents.

Plans for a whopping 2,200 square metre Sainsbury’s in Wilmer Place, Stoke Newington, have already sparked widespread anger amid fears that small businesses could be harmed.

In October hundreds of protesters dressed as zombies took to the streets of the area in protest.

In anonymous comments on the Hackney Citizen’s website and blogs elsewhere some residents have suggested that the debate over the supermarket is indicative of a class divide, with only the more affluent new arrivals to Hackney opposed to the arrival of the supermarket giant.

But Andrew Boff, a Conservative London Assembly Member, said this was “a distortion”.

Mr Boff said he was opposed to the Sainsbury’s near Broadway Market as there were “already five supermarkets there”.

He said: “These have taken the risk in good years and bad years, and then people like Sainsbury’s come in like vultures without taking any risk. They employ fewer people per square foot of retail area, contribute to the further distance goods have to travel before reaching the shelves and damage the environment because of this obsession they seem to have with wrapping everything in large amounts of cellophane. Do we want money to be sucked out of the local economies and channelled to the shareholders of large companies, or do we want competition at a local level?”

A Sainsbury’s spokeswoman said: “Our experience shows that Local stores can increase the number of people who shop locally, improving choice, value and availability of good food to residents who would otherwise have to travel further afield.”