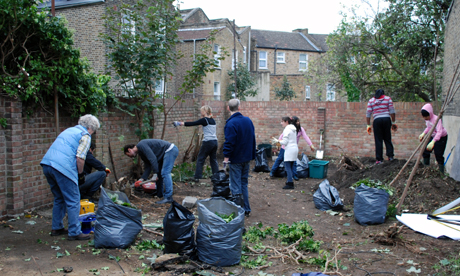 Glenarm Road residents do the groundwork

Derelict sites in Hackney are being transformed into community gardens by residents thanks to funding from a sustainable environment trust.

Groundwork London, part of the Groundwork Trust, is spending £700,000 on its Transform programme, which aims to regenerate 45 areas of neglected land into green areas around the 2012 Olympics host boroughs. The four Hackney sites are situated on Woodberry Down, Linzell Estate, Glenarm Road and Rhodes Estate.

The funding is being given to projects run by local volunteers who get together to give  an environmental makeover of their new mutual spaces.

Work is already underway at the project on Glenarm Road, Clapton. The disused land, which is currently owned by Newlon Housing, is being transformed by a group led by Carol Fenton, a Macmillan Cancer Support worker who lives opposite.

“I’ve been looking at it for 12 years and always thought it would be fantastic as a garden. We’re still at very early stages but they (Newlon Housing) are going to lease it to us, Glenarm residents.”

The residents have secured up to £5,000 from Transform to aid with the conversion. “Until January we’ve got help with designing the garden and support with getting some of the essential tools and the basics to get things going. They’ve even bought in corporate volunteers to help clear the site.”

The group plan to open the garden up to regular events when the work has finished. “We want to put on children’s activities and workshops,” carol said. “We might even grow things and sell them on at Chatsworth market.”

There are around 10 to 15 local residents in the group; a number that is increasing with every day of work on the site that goes by. “What’s so fantastic about it is I’ve had more conversations with Stephanie across the road in the last month than in the last 12 years,” said Carol. She added: “It’s a place to grow fruit and vegetables, but it’s also a space for the community.”

There are currently four more projects underway in Hackney which the Transform London team hope will bring physical and social benefits. In a recent statement they said: “Concrete, locked off areas are being transformed into open, beautiful spaces. The projects will bring our community closer together. It will create a friendship, cooperation and trust.”

Community projects officer for Transform, Rosie Hardicker, is considering applications from community groups. “There has been a lot of interest already in our application rounds over the summer,” she told the Hackney Citizen. “We have 13 sites on-going across the host boroughs. We are looking to drum up further interest,” she added.

Training is a key part of the funding and Hardicker was keen to stress the long-term aims concurrent with the Olympic Legacy programme. “We’re working with the community to support them and advise them and prepare them to apply for further funding when we leave them.”