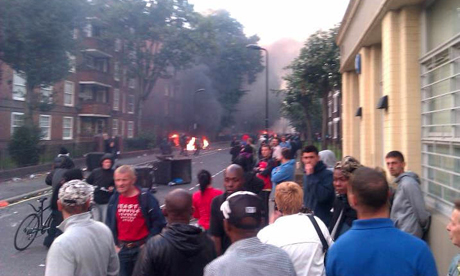 This article titled “London riots: ‘A generation who don’t respect their parents or police'” was written by Esther Addley, for The Guardian on Tuesday 9th August 2011 20.03 UTC

“Just be ready with your shutters, yeah?” It was 1pm outside Hackney Downs train station and two police community support officers were offering advice to the manager of the Tesco store next door, who had popped out in his shirt sleeves for an update, looking fretful.

Hackney had largely swept up the broken glass and cleared away the melted wheelie bins of the night before, the result of hundreds of masked youths fighting running battles with rows of riot police in several locations. But while the burnt-out cars were gone, leaving blackened, bubbled oblongs on the road, the mood was tense and strange, all the stranger given the dazzling lunchtime sunshine.

On Mare Street, the main thoroughfare a little to the south, almost every shop had already shuttered, while people stood in pavement huddles, looking out in case anything was about to happen.

The PCSOs, their radios crackling on their collarbones, had heard the same rumours as everyone else, that things might kick off in London Fields at 2pm, but seemed to know no more than the worried business owners. “Well, you know, it can all happen in two minutes,” one said to the manager, smiling. “Just be ready.”

It was a nervy day all over the capital. From Woolwich to Clapham Junction, Croydon to Enfield, Londoners had watched in dismay as familiar and well-loved streets were turned, for a time, into alien, frightening battle zones.

If off-licences and newsagents in poor east London were trashed and looted, so too were luxury goods shops in monied Notting Hill. At the Michelin-starred restaurant the Ledbury, near Westbourne Park, chefs surged from the kitchens wielding frying pans to charge at rioters, while homes and pubs in the leafy Ledbury Road had their windows smashed. Disturbances that many Londoners felt had some roots in the capital’s inequality also managed to unite much of the city in victimhood.

“I am having a look to make sure we don’t get caught by any rioters tonight,” said Neil Clifford, who is chief executive of the shoe chain Kurt Geiger but, for now, was sipping a cappuccino outside the Joseph store in Notting Hill. “It’s pretty shocking. We look an embarrassment to the world. I think we probably either should have a massive influx of police or the support of the army to deal with this.”

Pat Burn, a retired social worker who has lived in west London for 30 years, said she heard the sirens and feared for her and her elderly husband’s safety.

“I think everybody around here is very worried. It feels as if things are out of control.” She too thought military support might be needed. “The police should get the water cannon out and use the army if they can’t cope.

“I’m not sure how it will all end. This area will be a target because it is wealthy. The problem is that in this country we live in extremes of rich and poor. We need to live in the middle, like they do in Scandinavia.”

No one in Hackney was calling for the army. On Clarence Road, scene of some of the most dramatic and frightening rioting of the night, many said they felt the police had been alarming enough. All along the street, neighbours gathered in threes or fives, some talking discreetly among themselves, some debating noisily the cause of the disturbances. A few teenagers on low BMX bikes wheeled slowly along the street, looking at strangers with suspicion. No one was talking about anything else.

“The police were hanging at the bottom of the road, hundreds of them, waiting for trouble,” said one man in his early 40s, who had stood on his doorstep until 2am to protect his front windows. Like most people on the street he would not give his name.

“Their priority was to protect Mare Street … the banks, the post offices. That’s what their priortity is. Not us. Taxpayers are supposed to serve and protect the community. It’s a joke.”

But the young rioters’ grievances with the police, he and his friends agreed, were much more deep-seated. “When you have police officers jumping out of vans, calling 18-year-olds bitches and niggers; I’m a youth worker, I see it all over.

“That’s what’s happening. They are thinking, who the fuck are you? And so it starts,” he added.

“You have a generation of kids now that don’t respect their parents or the police,” chipped in his friend. “When we were youngsters we were made to have respect for the olders. Now if an older was to slap a youth that kid is going to pick up a hammer.

“I was one of these kids but it’s bloody hard for them. There’s nothing to do at all. University fees have gone up, education costs money. And there’s no jobs. This is them sending out a message.”

The same depressing picture – a mixture of alienation, anger at the police, boredom and mischief – was reiterated by locals across the Pembury estate. “They just want to be heard,” said a young black woman. “This is the only way some people have to communicate.”

Were cuts in services a factor? “Course they are. They cut our youth project by 75%. We used to work with gangs, run a workshop that brought police and young people together. Gone.

Plenty of local young people, of course, were not involved – and many had little sympathy for the disturbances. “I think it was opportunism,” said Sarah, 17, who lives behind the Pembury. “I can understand why people would riot in Tottenham but here? I just thought it was a chance for them to cause havoc. It’s just an excuse.”

“But there is a problem,” interrupted her friend Ally, 21. “Growing up here, a lot of young boys, they are constantly harassed and stop and searched. The people, not just young people, they don’t like the police. They don’t get along with the police. They say the police are no good. They feel like they don’t help them. So what was happening, they were just trying to give the police the runaround. Just to piss them off.”

Both young women are currently looking for work, without success. “My dad talks about his generation, it was hard for them, but I think it’s worse for us,” said Ally.

“Definitely some people are just taking a riot that was for injustice and turning it to something that hasn’t got anything to do with it. But maybe it’s a cry for help as well. People are doing it to be noticed, because there’s a problem.”

Behind a low gate inside the Pembury complex, around eight 20-something men were sitting in a huddle in a children’s play area around 3pm, some sitting on a low wall, one or two perched on swings or rocking toys, talking earnestly and quietly among themselves. Most had their hoods up, one was wearing a scarf wrapped around his head, concealing his face. They stopped talking abruptly, and two got up immediately to leave, when approached by the Guardian. “Nah,” said one, barely glancing up. “We don’t want to talk.”