There was an air of uncertainty and caution in Hackney yesterday. Businesses were boarded up, shutters were pulled down and shops closed early.

By mid-morning a number of community-minded residents were out in force in the borough, taking part in what has been dubbed a ‘social media’ organised clean-up operation. As lunchtime arrived much of the surface damage had been scrubbed away, burnt-out car carcasess had been towed and more police arrived to patrol the streets.

In the aftermath of the previous night’s events Hackney was eerily quiet yesterday. A Hackney resident told the Citizen: “Even the 24 hour Tesco is closed.”

Businesses that had opened in Narrow Way decided to close early around 2pm – a normally very busy high Street was uneasily calm. A local resident said she felt an urgency to get out to what few shops were trading so that she could buy her daily essentials.

Broken buses, with shattered windows, were being transported out of the bus depot at the bottom of Narrow Way. 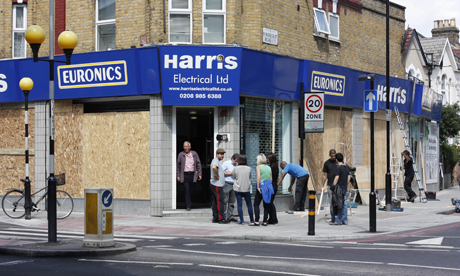 Harris Electrical was broken tinto at around 6.30pm on Monday evening, and again at around 4am on Tuesday morning. Photograph: Gemma Drake

Harris Electrical in Lower Clapton Road was broken into around 6:30pm on Monday evening. By 7pm, police officers were lining the pavement in front of the shop. But at 4am the following morning the store was broken into again. Many of the electrical goods, including widescreen plasma TVs were stolen and the shop’s façade was left in ruins.

Debbie Harris, one of the owners of this family business said: “We are just taking it day by day at the moment. How can we be any more secure?”

The electrical store is well known and used by the local community. Yesterday morning the police were again at the store, appealing for witnesses to come forward.

The caretaker at the Round Chapel, adjacent to Harris Electrical, witnessed the events unfold last night: some people were trapped inside the Chapel until it was deemed safe to escape later that night.

As the disruption spread, disorder bled into the sub-arteries and roads running off Mare Street and the Lower Clapton Road, away from the ears and eyes of the police. A resident from Median Road (E5) told how she awoke to find that “car windscreens had been smashed, wing mirrors pulled off cars and a brick was thrown through her neighbour’s window.”

On Goulton Road and Clarence Road, where a lot of the violence and disorder had broken out, residents hung about in wonder at the aftermath. Two Clarence Road mothers told the Citizen how after the terror of the previous night they “moved their children out to relatives’ houses in Essex for safety.”

The local Afro-Caribbean bookshop had being boarded up for protection, as was the rest of the road.

Another Clarence Road resident told how his neighbour, a photojournalist, had seized the opportunity and gone down onto their street to take pictures. She was then attacked by youths who stole both of her cameras.

Hackney Town Hall and Hackney Central library were two of many venues to close early on the previous day. There were a large number of police patrolling the area around the Town Hall: four marked police vans lined the south side of the square. Most of the police officers in this location had been brought up from Wales yesterday – evident by the Welsh van markings.

Broadway Market, normally a hub of activity was unusually quiet. A few of the bars and restaurants on Broadway Market remained open, even though they were boarded up. the two pubs, the Cat and Mutton and the Dove, remained open for trading into the early evening to a small number of locals.

Despite the sun shining, London Fields remained calm and quiet, a contrast to what is normally a very busy park. The Lido remained closed. A local resident said she had “hoped to escape the depressing mood in Hackney and have a swim. It is sad they felt unsafe to open.”

By 4pm yesterday all the shops on Wilton Way had pulled down their shutters and closed. Borough Wines were mending their metal shutters, where attempts to break in the previous night had compromised their security, though no alcohol was taken. 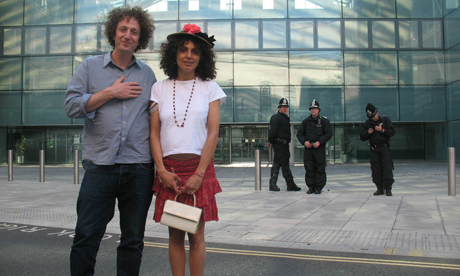 Due to be weds Banny and Nick had their wedding cancelled. Photograph: Gemma Drake

Two local Dalston residents, Banny and Nick, were due to be wed yesterday in Hackney Town Hall. Banny explained: “Hackney Council cancelled our wedding today at 1pm. Then at 4pm the River Café, in West London, cancelled our evening’s meal. What a day!”

They said they were disappointed but still upbeat. The disruption had cost them the wedding they had spent months planning, not to mention the sentimental value of the date: it commemorated nine years to the day that they had met.

As evening approached in Hackney everything seemed to be quiet: precautions have been taken, police are on patrol, but there are still questions to be answered.

Are you affected by the Hackney riots? (Citizens’ Advice)

Boris Johnson says London riots “are not a simple issue”

The militarisation of the riots would be a deadly mistake, says Hackney MP Diane Abbott

How Riots Start, and How They Can Be Stopped: Edward Glaeser (external site)

← London riots: ‘A generation who don’t respect their parents or police’The militarisation of policing the riots would be a deadly mistake →