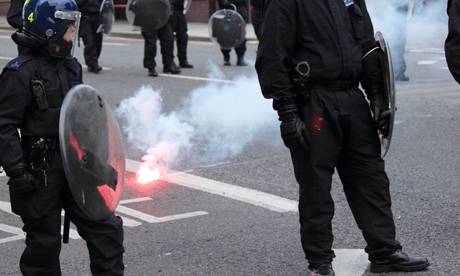 For three hours mayhem ruled in Hackney’s Pembury Estate, the centre of the violence in east London. The police were there, but there was no doubt who set the law in the estate, comprised of local authority mansion-blocks of flats.

Masked youths – both men and women – helped carry debris, bins, sticks and motorbikes, laying them across the roads to form a flaming boundary to the estate.

The crowd in Hackney – numbering at least 300 – appeared larger than any from previous nights of rioting.

In one of the most shocking incidents, a police officer in a solitary parked vehicle was attacked shortly before 9pm.

His windscreen was entirely smashed as a young man scaled the roof and pounded down with a brick. Others attacked from the sides with sticks and bottles.

Trapped, and unable to see out, the officer accelerated through the crowd, and a hail of missiles.

“I’ve been wanting to see us do this to the Feds for years,” said one man, in this 30s. “Kill the police,” said another, both hands aloft and brandishing sticks as weapons.”

The trouble in Hackney had erupted hours earlier, and served as a hint of the contagion that, within hours, would spread across London and to other pockets of the UK, in an unprecedented spate of rioting.

After two consecutive nights of disturbances in Tottenham, Edmonton, Enfield, Wood Green and Brixton, suddenly, around 4.30pm, there was an onset of looting in broad daylight, less than a mile from the City of London.

Rioting that has largely escaped the views of TV cameras was suddenly in full view, as helicopters hovered above.

As shop windows in Hackney’s Mare Street and Kingsland road were attacked, the Metropolitan Police showed they were prepared – moving in quickly with riot officers. And the petrol bombs proved that the rioters were also ready for a night of destruction.

The nature of the disturbances has shifted over the past 72 hours. In Tottenham on Saturday, the anger may have spilled over into looting, but there remained a sense of political purpose.

The violence had grown from a protest against the police shooting of Mark Duggan, and even those stealing TVs and mobile phones yelled “police are murderers” as they did so.

But 24 hours later, when young people took to the streets in boroughs across north London, and, in the south, in Brixton, they seemed intent on property theft rather than confrontations with police.

Using BlackBerry messenger to announce pre-planned meeting points, they roamed the streets seeking shops to target and melting away at the sign of any police to avoid confrontations. In Pembury Estate last night, the opposite was true. There was no doubting their objective: they wanted to fight police.

Crowds gathered there from 5pm, after having been moved on from Mare Street and London Fields, where there had been minor looting. All routes into the estate were blocked off with burning debris.

A man with a Jamaican flag across his face sprayed in red across the entrance to one tower block: “Fuck Da Police.”

“Come and get us, man,” shouted another, as he hurled a bottle at riot police gathered in the distance.

A van was stolen, rammed into a wall and set on fire. A Suzuki motorbike was dragged from a side road , surrounded by boxes and plastic bags, and set on fire. Several other vehicles were set alight.

Groups waited nearby, but at sufficient distance to avoid the shrapnel when the petrol tanks inevitably exploded.

“We aint going nowhere,” a man shouted. “This is our estate.” His comments, and those of others, felt like attempted expressions of power, as the crowd tried to assert their independence.

Journalists and bystanders were not welcome. Several were approached with demands to know if they were “Feds”.

Regardless of the answer, phones were swiped from hands and smashed. At least three reporters were attacked – one photographer was dragged to the ground and beaten by four youths.

After leaving the estate to burn for more than two hours, police attempted to secure the area from 8pm. Lines of riot police marched into the area, sealing off the main roads. After a few altercations, most of those inside escaped along back alleys, re-emerging outside and attacking police from nearby streets.

At times, there was hand-to-hand combat between riot officers and young men with makeshift weapons. But generally the crowd aimed for vulnerable targets – solitary police vans, unguarded shops and bus shelters were smashed.

On two occasions, when individual officers appeared isolated from their unit, the crowd surged forward with bricks and stones.

One policeman, who became detached from his colleagues attempted to sprint off into the crowd.

He tripped and was enveloped by youths kicking and beating him with clubs. Fellow riot officers surged forward and managed to rescue him.

The dilemma for police was clear: unable to contain the violence, they could only react minutes and sometimes hours after it had taken place.

Shortly before 9.30pm, mounted police arrived. The power dynamic had changed, and many of the crowd gestured toward north Hackney.

Police charged, and pursued youths through Hackney Downs. Watching dozens of police horses cantering across the park, past a playground with swings and through a hail of missiles, one woman said she felt she was “dreaming”. Then she paused, and put her hand to her mouth. “My children are out there,” she said.

← Turkish shopkeepers stand firm against rioters in DalstonLondon riots: ‘A generation who don’t respect their parents or police’ →