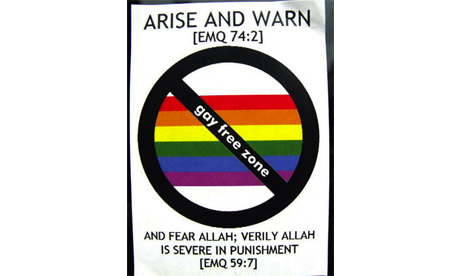 Stickers have been placed around Shoreditch and other parts of east London, declaring it a ‘gay-free zone’.

The stickers state: “Arise and Warn. Gay free zone. Verily Allah is severe in punishment” and feature a rainbow flag inside a diagonal bar.

Whilst no specific group has claimed responsibility or been accused of posting the stickers, some activists within the LGBT and Muslim community suspect that that a far-right group may be at work, trying to stir tension in these neighbourhoods.

This is not the first time these stickers have been sighted around Hackney – in September last year, there were reports of the same stickers around Stoke Newington.

Equality campaigner Peter Tatchell has spoken out on the issue, arguing that both homophobia and anti-Muslim bigotry are wrong. “LGBT and Muslim people should stand together, united against hate,” he said.

Likewise, Thierry Schaffauser, chair of gay rights group Out East, said, “We’ve been very sad to see homophobic stickers appearing in South Hackney and broader East London. We are in contact with Hackney Council and are discussing what potential action to take.

“We remain very prudent since we don’t know who the authors and the motives behind the stickers might be. What is sure is that we condemn hate in all forms and that whoever is behind the stickers, we will denounce the attempts to divide our communities. We want Hackney and East London to remain a diverse place where we all live together, whatever our differences are.”

Following requests for comment, Hackney police and Hackney Council both said they are committed to combating hate crime.

Detective Inspector Amy Quirk, from Hackney’s Community Safety Unit, said: ” Hackney police have an excellent working relationship with Hackney Council and there is a huge amount of good work going on to prevent and detect hate crime. Where criminal offences are committed and suspects identified, Hackney police will make arrests.

“We will not try to second guess the author or their motivation, but will deal fairly and firmly with whoever is behind these stickers which are clearly offensive.

“To date there have been no complaints received  by the police in relation to the stickers.  Hackney’s Safer Neighbourhoods teams are aware of these posters and will continue to monitor the situation and take action where appropriate.”

A Hackney Council spokesperson said: “Hackney Council condemns this hateful act, and we are committed to working collaboratively with our partners to combat homophobic crime in the borough.

“We have been working closely with LGBT liaison officers at Hackney and Tower Hamlets Police to offer reassurance and to establish good working relationships with gay-friendly venues in the borough. We have also increased street lighting and CCTV in certain areas. In addition, a dedicated police support number and email have been made available for the LGBT community.

“At Hackney Council we support LGBT month each year, and will continue to use all channels available to us to engender mutual respect, understanding and tolerance within our communities.”