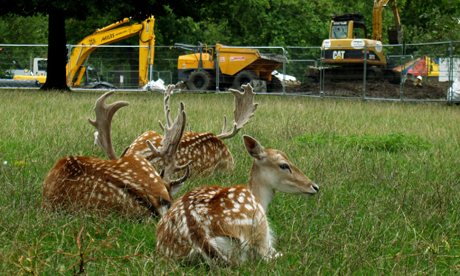 Another deer was found dead in Clissold Park at around 4pm yesterday (Sunday 20 February), a Hackney Council spokesperson confirmed this morning. A witness said a security guard was trying to contact the park wardens to alert them to the situation.

Last week a female deer was found dead in Clissold Park (on Monday 14 February) – just six months to the day after a deer was fatally attacked in its pen, killed by a dog the previous evening when perimeter fencing around its enclosure was breached.

All this has led to the formation last week of new local group, Clissold Park Zoo Watch (CPZW). CPWZ has launched a campaign for improved animal welfare at ‘Clissold Park Zoo’, Stoke Newington and are calling for the herd of eight fallow deer to be ‘re-homed’.

A spokesperson for Clissold Park Zoowatch said: “This latest death shocks but is no surprise. Clissold Park is the wrong place for a zoo – amongst other things the level of vandalism and uncontrolled dogs is too high. It’s time to close down this inhumane anachronism for good.

“We urge the council to re-home the deer to a non-cull free-to-roam location. We are researching the options and will be presenting them to the council.The council’s deer vet will also know of alternatives.”

Councillor Jonathan McShane, Cabinet Member for Community Services said: “I’m sorry to confirm that a female deer died in Clissold Park on Sunday. Sadly, this means we have lost two female deer in the space of a week.

“Once again, this is an extremely upsetting incident for everyone involved with Clissold Park and the deer. Although we are still awaiting the full results of the post mortem, there is no evidence to suggest the deer suffered any type of physical attack.

“We are working closely with Peter Green, our veterinary consultant, and expect his independent report at the end of this week. Inevitably, our discussions with Mr Green will involve consideration of whether we are able to keep deer in the park in the long term.”