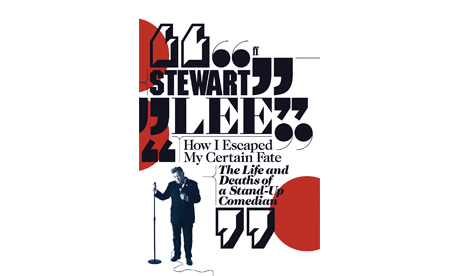 The hypocrisy and vacuity of celebrity has been a constant target of Stewart Lee’s comedy, so it’s intriguing that he has now written his own autobiography – adopting a genre which, perhaps more than any other, feeds off and fuels our modern obsession with fame.

Thankfully, this is no ghost-written, platitude-ridden blockbuster, but an insightful and engaging read which ties an in depth account of Lee’s career into the wider history of alternative comedy since the eighties.

For those too young to remember this decade, it can be a shock to realise how different things were then.  Recalling his visit to Oxford for a university interview, Lee describes a tuna mayonnaise roll and cappuccino as “the most exotic meal I had ever seen”.  These were politically charged times and a new breed of alternative stand up comic had, as he puts it, “destroyed the British comedy hegemony of Upper-Class Oxbridge Satirical Songs and Working-Class Bow Tie-Sporting Racism”.

Lee started performing just as ‘alternative comedy’ was beginning to become more mainstream and commercialised.  It was following a particularly depressing episode in Liverpool that he suddenly realised “it was the twenty-first century and I was a mumbling relic from an earlier age”.

The bulk of the book sets out his subsequent rise to critical and commercial success (via a period where he abandoned stand up entirely), as the landscape of comedy has continued to be transformed.  The transcripts of three shows are reproduced in full, which not only spares the reader a long and unbroken chronological account, but also reminds us of some of his best routines, and allows Lee to comment extensively on the process of creating and performing.

In keeping with the apparently rambling nature of Lee’s comedy, footnotes are employed liberally and sometimes stretch to more than a page.  It makes reading the book a little like watching Lee perform – with frequent references back, interruptions and  digressions – but the technique helps to incorporate a large amount of detail, and Lee is genuinely enlightening about his influences, the sources of his ideas, and his beliefs about stand up in general.

It will surprise no one familiar with Lee’s work to learn that he frequently discusses other comedians, and one of the most interesting parts of the book concerns Lee’s relationship to Ricky Gervais.  Watching Gervais perform in the Bloomsbury Theatre, Lee realised he was envious of the way his famous acquaintance achieved success with a style of delivery and subject matter not dissimilar to his own.  It was this disorienting experience, along with an endorsement from Gervais, that ultimately relaunched his career on an upward arc.

Another pivotal moment is his account of watching a medieval fools’ day reconstruction performed by French drama students.  His fascination with this tradition takes him to New Mexico to document the ‘sacred clown’ festivals of Native American societies, and eventually leads on to an impassioned defence of stand up comedy as an art form.   (On finishing reading, the strongest impression is of Lee’s fundamental belief in the creative potential and moral purpose of stand up.)

The controversy and success of Jerry Springer, The Opera is also covered – not only Lee’s well known battle with religious conservatives, but also his disaffection when the show’s popularity took it into the hands of West End producers.  His mistrust of large production companies and broadcasters is a recurrent theme.

A resident of Hackney, Lee proudly declares, “I am the most Stoke Newington comic there is”, and praises the area’s “shabby would-be bohemianism”.  Among the many references to the neighbourhood in the book is a routine based on his experience of visiting Weight Watchers in Stamford Hill.  As someone who missed the eighties, I was also glad to be pointed in the direction of Alexei Sayle’s classic sketch, “What’s on in Stoke Newington”.

At odds with his at times callous and bitter stage persona (he admits he enjoys alienating his audiences), Lee comes across as a reasonable and genial, though sharp and very well informed, guide.  Aside from the local interest, this is a book which will appeal to anyone who is interested in comedy and particularly in Stewart Lee’s brand of self-referential and analytical humour.