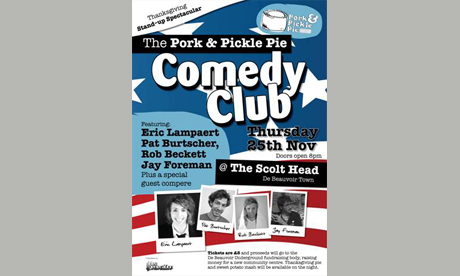 Hackney’s Scolt Head pub plays host to the renowned (and fantastically named) Pork & Pickle Pie Comedy Club this November, and will be welcoming some of the comedy circuit’s most side-splitting characters through its doors.

There’s nothing laughable about the cause being supported through the event’s funds, however. De Beauvoir Underground, the community fundraising body, will be on the receiving end of any profits made, with all the money going towards a new community centre.

Performers include Eric Lampaert, 24, winner of Latitude’s Best New Act of the Year 2010 and the Laughing Horse’s Big Big Big Comedy Competition, and musical comedian Jay Foreman, 26, who was selected as BBC New Talent Pick of the Fringe.

For some of the performers, it won’t be their first time in Hackney. Canadian comedian Pat Burtscher qualified for the finals of the Hackney Empire New Act of the Year back in 2008, and will now make a return to the borough in November’s event.

Paul Drury, curator of the Pork & Pickle Pie Comedy Club, said: “These comedians are sure to develop a special relationship directly with your funny-bone.”

“The whole Pork & Pickle Pie Comedy Club team are really excited about 25 November – and the Thanksgiving Pie and sweet potato mash too of course.”