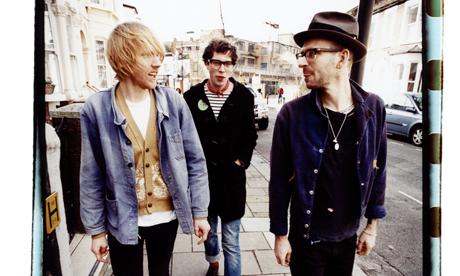 Dalston’s rise to coolness is by now a well-worn cliché of the British press. Yet, unsurprisingly, people were living and making music in the neighbourhood long before synth-playing Cambridgeshire arrivals became subjects of ethnographic YouTube films.

Pop-punk trio Male Bonding are among the local residents who predate the Dalston Superstore. Having met working in second-hand record shops across London, they began playing together regularly around 2007, later signing on to venerable US indie label Sub Pop.

Fast, quirky and extremely catchy, debut album Nothing Hurts has firmly established Male Bonding as one of the brightest newcomers on London’s indie scene. Moreover, the trio’s mix of American musical influences and English sensibilities has broken the mold of British indie upstarts by getting stateside traction.

Constant gigging and a grassroots approach to spreading their music are behind Male Bonding’s success – the band run their own record label and steadily release limited edition split records with like-minded local artists.

Asked whether the band’s DIY mentality stems from their punk rock roots or the pressures of the modern music business, bassist Kevin Hendrick said: “It’s more a case of doing things how you want them to be done. And if you’re doing it yourself, then you can probably enjoy more aspects of it. There’s no career. It’s more a creative urge you can’t deny.”

The kudos attached to being on Sub Pop, its distributional muscle and media connections must also help. Male Bonding have recently been touring with big-ticket indie names such as No Age and Blood Red Shoes and are preparing for a European tour with Crystal Castles.

While Male Bonding enjoys a healthy doze of internet hype, Kevin says constant interviews can be a drag. “I appreciate different levels of engagement. We all have our own blogs alongside our band blog. I feel now [that] more than ever bands and artists can generate their own myths; can perpetuate their own presence.”

He adds: “Being on the cover of some magazine doesn’t mean much anymore. The internet is wonderful for taking that power away from ‘the press’. It also probably makes journalists more resourceful. I hope it does.”

Male Bonding are currently writing their second album which they hope to record in March.

Joe and Will Ask?

← Interview: Steve Ball, the NestIt’s Movember at the Kenton →