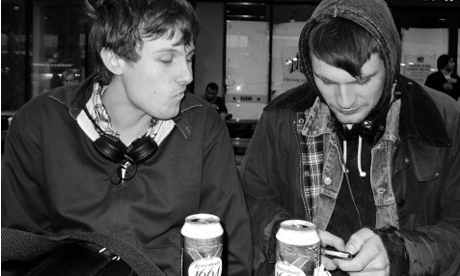 The electronica duo, Joe And Will Ask?

Three days before London Fashion Week Anatoliy Kurmanaev met designer William Richard Green in a crammed London Fields studio to talk about his other artistic project – the Joe And Will Ask? electronica duo with Joseph Ashworth.

How does it feel to simultaneously pursue full time music and fashion projects? “It’s kind of wearing me down a bit,” admits Will as people shuffle back and forth between us in a crammed London Fields studio, putting eleventh hour finishing touches to the collection. “I guess if one of them takes off, then I can use the money from it to pay for the other thing,” he adds, laughing.

A few months after London Fashion Week, Joe and Will are due to release their debut album, hoping to propel themselves beyond the club success. The feat is within their reach – after five years of collaboration the two already boast around seven singles, a monthly residency at the Ministry of Sound, numerous shows in Europe and Japan and slots at prominent festivals.

Notwithstanding their frequent appearances at über-trendy Shoreditch club nights such as Trailer Trash and Durr, Joe and Will’s music progressed naturally from the generic electro bandwagon before it ran out of steam.

“Our music now sounds completely different to when we first started,” says Joe, who studied town planning at Bartlett College. “We started as the products of the whole ‘electro/Ed Banger’ kind of scene and then developed into something more specifically our sound.” A run through their singles testifies to diversity; each is a nod to a distinct electronica sub-genre – techno, electro, house, trance.

The duo have been working on the album for nearly two years, ditching their initial record deal to end up on the established indie label Deadly People. This led to collaborations with other up-and-coming artists on their roster such as O. Children. Joe says they are still making tracks for the album. “We have too many. And we keep meeting new friends who want to write songs with us and obviously we wouldn’t want to waste an opportunity. It’s an ongoing process, [but] we probably need to draw a line at some point.”

Despite being electronica producers, Joe and Will are torn between their club roots and indie aesthetic. Joe says quite often techno albums are just a series of singles piled together rather than a self-contained musical statement. “They don’t tour with it really, not in the same way that a band tours. We would quite like to have a more traditional form of releasing an album and touring.”

Is there an artistic connection between Will’s fashion and musical pursuits? “They don’t really cross paths that much, to be honest,” he replies. “Maybe on some subliminal level they do connect. But it’s not as obvious as ‘rock bands wear leather jackets/I design leather jackets.’ I don’t think that anyone in the clubs we play would wear the clothes I make.”