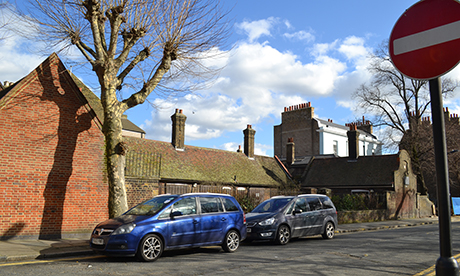 A councillor has branded an almshouses charity ‘cavalier’ for putting up for sale an historic terrace of homes intended as a refuge for the poor and elderly.

Bishop Wood Almshouses in Clapton – a complex of homes dating from the end of the 1600s – could be turned into expensive luxury flats if bought by a developer.

The complex also contains a chapel that is reputedly England’s smallest, and Leabridge ward councillor Ian Rathbone – who has criticised the impending sell-off – says this place of worship is still used for some services.

Dr Spurstowe and Bishop Wood Almshouses Charity, which owns the buildings, says it would “dearly love” to refurbish them but claims this work would cost “getting on for three quarters of a million pounds”.

A spokesperson added: “The charity cannot justify spending that kind of money to provide only four modern flats.

“They are therefore considering their options, one of which is to sell the precious old building, and therefore have decided to seek a buyer.”

The charity has tried without success to get help from heritage charities, the spokesperson added.

But Cllr Rathbone said more could have been done to maintain the almshouses, which are currently in a poor state of repair, adding that he was concerned about the future of the chapel.

He said: “The trustees should have taken more responsibility for maintaining the buildings down the years instead of leaving them to deteriorate.

“The almshouses have been run down for 50 years.

“The chapel was there for the spiritual needs of the inhabitants and now it is going to be someone’s bedroom or living room.

“The trustees say there is no barrier to this because the chapel is not consecrated, but the local vicar is saying it has been rededicated.

“It does strike you that although there is the technicality of it being not consecrated, surely if it is being regularly used as a spiritual place there needs to be some acknowledgement of that rather than this cavalier approach.”

The almshouses were built with money left by Thomas Wood, who was born in Clapton in 1607 and became Bishop of Lichfield after the English Civil War.

The last residents left last year and were relocated to Dr Spurstowe and Bishop Wood Almshouse on Navarino Road.

Dr Spurstowe and Bishop Wood Almshouses Charity says it intends to build “another brand new, large almshouse on a new site in Hackney” using the proceeds from any sale.

The history of the almshouses has been recognized by way of a Grade II listing from English Heritage, and any buyer would have to conform to strict building conservation rules.