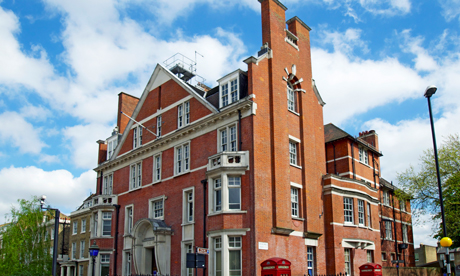 A former police station has been put up for sale less than a month after closing its doors.

The Grade II listed building that housed Hackney Central Police Station is being marketed by estate agents Knight Frank with emphasis on its potential for residential development.

An online listing describes the site on Lower Clapton Road as: “Former police station with sui generis use. Residential development potential subject to the necessary consents.”

Bids are being invited, with no reserve price set.

The sale consists of the main four storey building, a house on St John’s Church Road and a car park on the site.

It is being sold without planning permission, meaning any purchaser would need to gain council approval for their intended use of the site.

The sale brochure notes that a range of alternative uses are possible, subject to the owner obtaining the necessary consents, with a planning report prepared for the Mayor’s Office for Policing and Crime advising that the site would be “suitable for residential, retail, commercial, community and leisure uses development”.

The police station closed in July as part of cost-cutting measures which saw police buildings across London shut.

In total, 63 front counters were hit with closure, with 29 of the buildings earmarked for sale.

The move leaves Hackney with only two police stations, in Shoreditch and Stoke Newington, and a number of ‘contact points’, open for three hours per week each.

The closing date for bids for the Lower Clapton Road site is 11 October, with a number of viewings being offered between August and early October.

Neither Knight Frank nor the Mayor’s Office for Policing and Crime would confirm how much they were hoping to sell the property for.