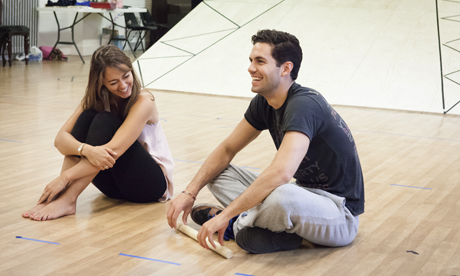 Boon for Braschi: Stefano will appear alongside David Walliams and Sheridan Smith

Ask any actor which theatre director they would most like to work with and chances are the name Michael Grandage – formerly the artistic director of the respected Donmar Warehouse – would at least get a mention.

So for Hackney-based actor Stefano Braschi, 28, landing the part of Demetrius in A Midsummer Night’s Dream, which opens this month at the Noel Coward Theatre, was something of a boon.

He will be performing alongside David Walliams and Sheridan Smith.

“I don’t know an actor who doesn’t want to work with Michael Grandage,” says Braschi. “He is amazingly supportive of young actors. His productions are really energised and the cast, apart from being talented, are really fun and nice people, which helps create a sense of forward momentum and ensemble.”

It’s not the first time Stefano, who only graduated from drama school four years ago, has featured in a Grandage production. Most notably, he acted alongside Judy Dench and Ben Whishaw earlier this year in John Logan’s play Peter and Alice, also at the Noel Coward Theatre.

“I’ve had a brilliant time and been lucky enough to work with Michael on some really diverse and exciting productions,” he says.

“I started out, like most actors, unaware of where it would take me. A lot of it is out of your control so you have to be hard-working and persistent and believe in yourself when the opportunities aren’t there.”

Stefano describes working with the likes of Michael Grandage and Judy Dench “an incredible learning experience”.

“It’s inspiring to learn that it’s not all ‘me me me’, it’s about ‘us’, and especially in the theatre you can only be as cohesive a unit as the captains let you be,” he says.

However, the atmosphere backstage doesn’t mean Stefano doesn’t feel nervous, and no less so given that he’ll be performing in one of Shakespeare’s most popular comedies.

He admits: “Pretty much everyone will have seen it before and some maybe even played in it whether in amateur dramatics or at school – so there’s a bit of excited nerves about that.”

← Arancini Brothers success proves that to compete with chains, all you need is ballsExclusive: Cop shop up for sale less than a month after closing its doors →