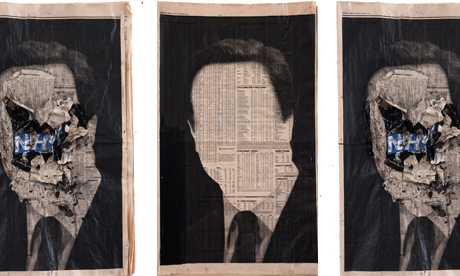 An exhibition providing a scathing critique of the prime minister and his government has opened at the Hang-Up gallery in Stoke Newington.

Blue Murder presents a portrait of David Cameron, printed on pages from the Financial Times, in a series that uses underlain images to attack Conservative ideologies and the impact their implementation is having on the welfare state.

The simplicity in the execution of the idea complements the stark interior of the space. The artwork at the Hang-Up Gallery comes from the collaborative kennardphillipps, which has established itself with exhibitions intertwined with political causes for over a decade.

The gallery on Stoke Newington High Street opened last December and has set out to mirror its surroundings, running a programme which aims to enthral visitors with work from both associated and up-and-coming artists.

The duo produce work not only for galleries but for the street, online and print media too. They lead workshops to help budding artists hone their skills and communicate their world view through art.

The pair’s projects function as critiques alongside global campaigns advocating social and political change. The work, as the two see it, is interconnected with the movements confronting the established systems they oppose.

With this in mind, kennardphillipps encourage protesters to use their artwork and they provide prints for use by activists through a free download page.

In the form of share prices and sterling notes, Blue Murder seeks to reveal what its creators view to be the true motivations behind this government’s policies.

Before they can be accused of being ‘caught red handed’, to extend the metaphor further, it is worth stating that kennardphillipps’ past work has featured Labour leaders in power.

Established in 2002 by Cat Phillipps and Peter Kennard, kennardphillipps began creating art in reaction to the invasion of Iraq. Its focus has broadened since then as it aims to produce work that responds to power and war all around the world.

The meagre materials used in Blue Murder are integral to the concept which is sure to rouse feelings in Hackney as the borough braces itself for the results of the latest public spending cuts.