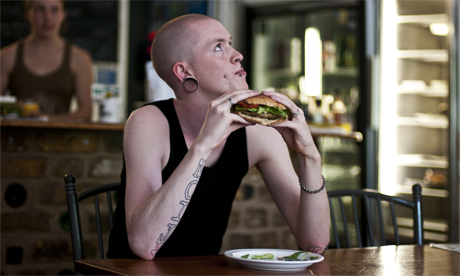 The ‘Punk’ burger, made from tofu and pumpkin, is served with potato wedges and salad. Photo: Tanja Schimpl

Hackney is a good place to be a vegan or vegetarian. Most of the concentration of veg-friendly places tend to cluster around Stoke Newington Church Street and Broadway Market, and offer a lot of choice, in a nice ‘we-read-the-Guardian’ kind of way.

The borough, however, is also home to the Pogo Café, a stone’s throw away from the chaos of Mare Street, unobtrusively positioned on the rather run-down Clarence Road. Recently selected by Channel 4 as one of the top ten veggie restaurants in the country, the Pogo is an autonomous, non-hierarchical 100 per cent vegan space run completely by volunteers. The café has been going strong now since 2004 when a voluntary workers’ cooperative took over the lease from Pumpkins vegetarian restaurant.

Regular fixtures on the menu are the burgers, made from scratch from organic tofu and pumpkin seeds – my own personal recommendation would be the ‘Punk’ burger – and all come with potato wedges and salad. Every day they have a different array of specials, with two or three main courses, fresh soup and salads. What’s on offer changes regularly, so ring ahead for details. The Pogo also does an impressive range of vegan cakes, many of them gluten free, which is a major bonus for any vegans with a sweet tooth who are missing a bit of indulgence! They also offer a kids menu, and a massive range of organic teas, coffees, and even vegan milkshakes and smoothies.

I first came into contact with the place about four years ago, when at the time I was a mere humble vegetarian, and was greatly impressed. An active part and focal point for the various punk/DIY/eco/animal rights scenes in London, the Pogo really is – to me at least – much more than just a restaurant.

In my time of visiting there, there have been innumerable exhibitions displaying a wide variety of different, underground, artists. Various grassroots campaign groups use the Pogo as a meeting place, they hold regular free film screenings showcasing a variety of interesting films that concern social/political issues (not just animal rights!), and they also sporadically hold acoustic gigs, so there is plenty of opportunity to feed your mind as well as your belly.

Many people can find the ‘vegan’ tag somewhat off putting, especially when coupled with some relatively radical politics, but the Pogo Café is a friendly place; visiting is a good way to learn more about the whys and wherefores of the issues surrounding this often misunderstood dietary choice. And the food is great.