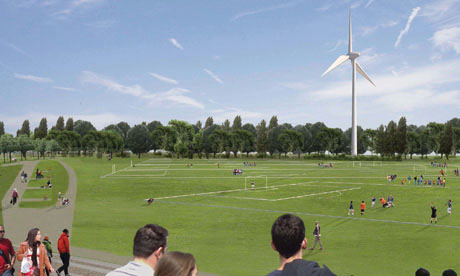 Artist's impression of the proposed wind turbine on Hackney Marshes

In the light of the Olympic Delivery Authority’s decision to scrap plans for a wind turbine at Eton Manor, Hackney Marshes User Group (HMUG) has issued the following statement:

The Eton Manor and East Marsh turbines were conceived as twin symbolic emblems of a sustainable Olympics. They are identical in technical specification, size and potential maximum power output (2 MW). LB [The London borough of] Hackney “adopted” the second turbine because the ODA had already gone through the procurement process, which could “save” Hackney the procurement costs due to the similarities between the two. HMUG’s concerns have been for the impacts of the second turbine, proposed for East Marsh.

On 16 March 2010 HMUG members met ecology experts who had carried out impact assessments on Marsh wildlife, and engineers, in order to establish some facts about the East Marsh turbine, which we felt were in short supply. In the course of that meeting HMUG established:

1. the assumed actual power output of each turbine (the “load factor”) is 22.8% of the potential maximum of 2 MW. (No turbine can produce 100% load factor unless it runs 24/7 at maximum output, which never happens.) But 22.8% is very near the lower end of the band of economical output, and

2. assessments of wildlife mortality (deaths) of birds and bats around the East Marsh turbine have been based on inadequate data and the interpretations placed on that data are questionable, erring towards understating likely mortality rates.

These two facts were given out at the same meeting, so it is reasonable to assume that the 22.8 per cent figure is based on optimistic assessments of wildlife mortality, i.e. that a realistic assessment of mortality would result in a yet lower load factor. Identical to the Eton Manor turbine, all the same safety and economic arguments apply to the East Marsh project; in addition, either the wildlife impacts on East Marsh may make the turbine politically unacceptable, or, if it is closed down during bat and bird migratory periods to avoid political damage, operational efficiency (load factor) will further reduce below 22.8 per cent.

Safety rule changes and design changes may be valid reasons for dropping the Eton Manor turbine but critically they have pushed up the costs to the point where a marginally economic project has now become unprofitable.

For wind farms, wind equals profit. Figures in latest windfarm company annual reports show that installed land-based windfarms are producing less than their budgeted power and so are less profitable than their business plans allowed, due in many cases to wind forecasts not being borne out in reality (i.e. the business plan over-estimated the wind).

Publicity for the real facts

Both projects must win planning approval when the case in favour of the turbines will be up for public scrutiny, including the data on which the environmental impacts have been assessed. HMUG have made their misgivings clear to Hackney [Council] who know that the environmental case must be won on the basis of facts. The local authorities, Waltham Forest (Eton Manor) and Hackney (East Marsh), will be on trial if they are seen to have supported projects which are discredited on environmental grounds, and may even suffer the embarrassment of having their own planning departments recommend refusal of planning permission.

Perhaps a new realism, pointing to a more risky environment, has now gripped the prospective supplier. It seems the supplier of the Eton Manor turbine takes this view. It is likely that a similar view is being taken of the other projected turbine on East Marsh, though this has yet to be stated.

HMUG takes no stance on the turbine proposal, however we have been very keen to establish the facts behind the project, so that we can adopt a responsible position in due course. As a principle HMUG supports sustainable energy generation but not hasty publicity-seeking gestures towards sustainability.

Residents give thumbs-up to wind turbine on Hackney Marshes

Mayor: difficult to see how wind turbine could be rejected