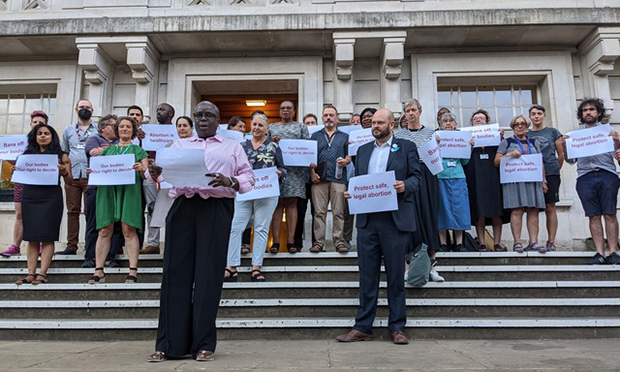 Politicians in Hackney have staged a protest over a landmark decision in the US ending the right to abortion and pledged to be “vigilant over the erasure of UK rights”.

Councillors gathered yesterday in front of the Town Hall with posters as Cllr Carole Williams, cabinet member for employment, skills and human resources, read out a statement.

She said: “I’m outraged and horrified that the US Supreme Court has overturned Roe vs Wade, ending 50 years of legal protection of abortion rights for millions of women”.

The court’s decision overturned the 1973 Roe vs Wade ruling which gave women in America the right to an abortion.

Last month, the US Supreme Court ruled in favour of Mississippi’s ban on abortion after 15 weeks, and many other states are planning new bans on abortion.

In the UK, abortions can be carried out in the first 24 weeks of pregnancy and only in special circumstances after that, following legalisation in 1967.

Cllr Williams said the US Supreme Court’s “disturbing decision” is “an attack on women’s bodily autonomy”.

She added: “Black, indigenous and global majority groups have long been denied bodily autonomy through the closure of clinics and in cases of forced sterilisation.

“I recognise that the US Supreme Court’s decision has a disproportionate impact on Black, indigenous and people of colour, as well as everyone in low-income groups.”

She said the ruling “will have a devastating consequence in the case of medical abortions, life-threatening pregnancies, those diagnosed with cancer who will not be able to get chemotherapy for the duration of their pregnancy, women who have had incomplete miscarriages, and other life-threatening circumstances.”

Cllr Williams explained: “This is not about being pro-life, nor is it what freedom looks like. It is ideological fundamentalism that is resetting the clock to a time when the constitution was written by slave-owners who saw women and Black people as property.”

She warned it could have wider impacts over access to contraception, right to privacy, and “rolling back same-sex marriages”.

She also fears it could have implications in the UK, where “the right to abortion is not entrenched in law” and some MPs support “reduced time limits, more restrictive criteria and limiting grounds for abortion”.

“Until abortion is decriminalised in the UK it will remain a precarious and stigmatised part of UK healthcare,” she said, and explained that it was important to “send a clear message that personal autonomy should be protected as a fundamental human right”.

She said that it is important to take a stand in the UK as the decision is “emboldening” anti-abortion campaigners, adding: “It is a health issue.”

She suggested that people support Planned Parenthood National Network of Abortion Funds and Alliance for Choice.