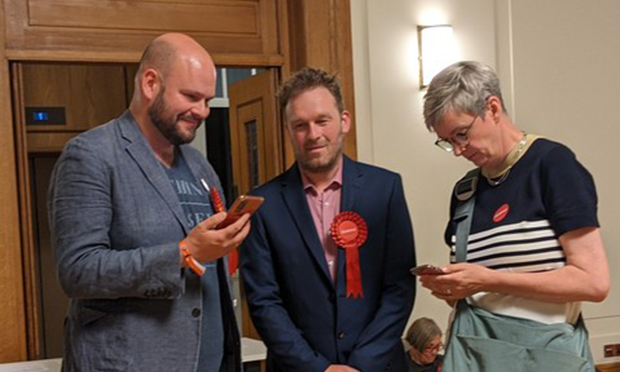 De Beauvoir residents have picked Labour’s Joe Walker as their new councillor in a by-election that saw the Green candidate biting at his heels with just 27 fewer votes.

Yesterday’s poll was prompted by the resignation of Labour councillor Tom Dewey just a couple of weeks after May’s local elections.

Walker said: “I really look forward to changing and transforming the lives of the people of De Beauvoir.”

He will represent the ward alongside party colleague Polly Billington, who was re-elected in May.

He said the election was fought at “a time of real crisis and national crisis as well” as it came on the day Prime Minster Boris Johnson resigned.

“I fought this campaign very much on the cost-of-living crisis.”

He said he wants to build on the conversations he had with residents to give them “meaningful representation.”

Walker, who is the director of the Clapton Commons community organisation, ran in Springfield in 2018.

This time around, he was elected with 758 votes – just ahead of the Green candidate Tyrone Scott, who gained 731 votes.

As expected with a by-election, turnout was low. Just 27.64 per cent of an electorate of 6,591 people headed to the polling station – down on the 33.36 per cent who voted in May.

Political campaigners said they did not see an impact in turnout because of the Prime Minister’s resignation.

Mayor Philip Glanville said people were fascinated by the unfolding events but added: “I do not think it had any impact locally.”

The run-up to the vote saw the parties working hard to persuade voters. Some residents reported being canvassed by three parties in a single day.

On polling day, Labour’s Mary Creagh, a former MP who also served as an Islington councillor for seven years, hit the campaign trail for Joe Walker.

Tyrone Scott was unable to attend the count after contracting Covid.

In a statement, he said: “It has been a pleasure speaking to everybody in the community. I am proud of having such a strong campaign and came close to joining two newly elected Green councillors Zoe Garbett and Alastair Binnie-Lubbock .”

“Even kids were cheering,” she added.

She pointed out: “The issues in De Beauvoir are not changing, issues around what improvements are made on Downham Road.”

She also campaigned around the cost-of-living crisis, as well as the environment and crime.

National politics may have played a part for Conservative candidate Oliver Hall, who gained just 82 votes.

Hall ran in May’s mayoral elections, taking third place, and for a council seat in Hoxton West. He was not at the count.

Kristal Bayliss for the Women’s Equality Party gained 27 votes, and was also absent for the declaration of results.

There are now 50 Labour councillors, five Conservatives and two Greens.

The full results in the by-election are as follows:

← ‘Robot pets to world-saving tech’: Children’s visions of the future go on display in Hackney as part of charity projectSexual health service launches in Hackney to tackle ‘unfair and avoidable’ inequalities →