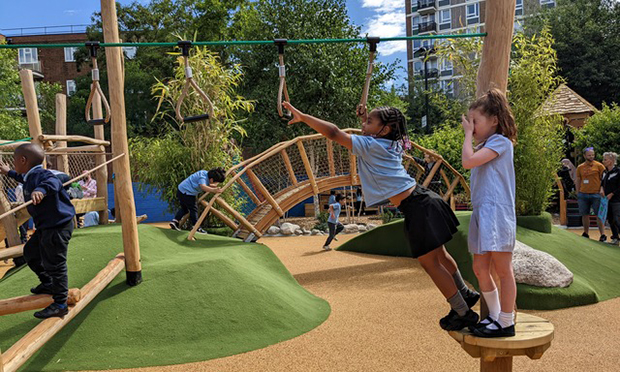 “It’s exciting,” said four-year-old Liana as she tested out a new play area for the youngest pupils at a Hoxton school.

“I like the monkey bars because they’re fun,” said Jenny as she joined her friends on the new equipment.

The space at Thomas Fairchild Community School was designed by Hackney firm Made from Scratch, with the council contributing to the £40,000 budget.

In July 2009, the school’s old Victorian home was destroyed by a fire. The replacement building cost £10m and was completed in 2012.

The school is named after influential 18th-century plant expert Thomas Fairchild, who had a nursery and hothouse in Hoxton.

The new area is designed to boost play space for the younger pupils following an Ofsted inspection in 2020 that found the school “requires improvement”.

Executive head Nicola Reid said: “It’s a key part of an accessible curriculum. They will develop their gross and fine motor skills.”

Children will build on skills such as jumping and climbing as well as manual dexterity. 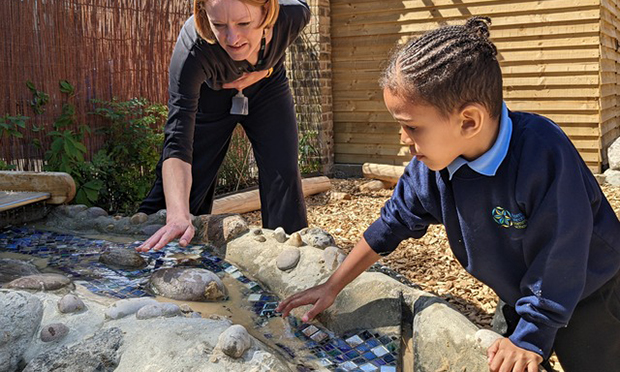 The sand pit was a star attraction. Photograph: Julia Gregory

The sand pit was one of the most popular attractions when the children were let loose as soon as the ribbon was cut.

They enjoyed building dams from sand and covering the blue mosaic patterning. One girl even built snowmen from sand with the help of associate deputy headteacher Sarah Plaxton.

She added that some of the children have limited access to outdoor space after school, and that the Covid lockdowns had affected children’s ability to play alongside others.

Designers Llewelyn Jones and Lizzy Fleming from Made from Scratch said they had created different areas for children, with a willow tunnel to provide shade as they explore and a tree house where they can sit and read and enjoy being quieter.

They said features like the sand pit help children learn as they play, such as creating dams in the water channel and seeing the impact, or challenging themselves on the climbing equipment.

“We have used the trees already in the playground and created a garden too so they can think about nature,” they explained.

Annie Gammon, the council’s director of education, said the playground is a “wonderful place for our younger children”.

She added: “It has been a great collaborative development which Hackney Education and Hackney Council have been pleased to support.

“Well done to all those who had the vision and drive to make it happen.”