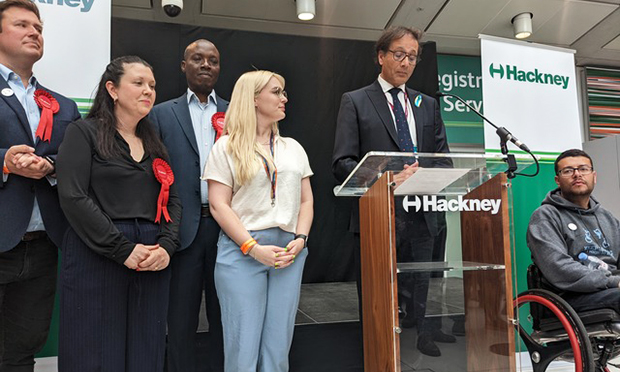 Town hall bosses had to apologise when the stage where election results were announced proved to be inaccessible for a wheelchair user.

Independent Network candidate Peter Smorthit was stunned when he realised that he would not be able to get on to the small stage where Hackney’s council election results were announced.

The results ceremony is a traditional part of the elections and successful candidates commiserate with those who did not win a seat to the town hall.

It  became apparent that the two steps up to the stage at the council’s contact centre made it inaccessible for him to join Hoxton East and Shoreditch candidates when the results were read out.

He stood as an independent because: “I’m fed up with how us residents, especially disabled residents like myself have been treated,” by the previous administration.

Mr Smorthit, who was disabled in an accident 11 years ago when scaffolding collapsed at work,  pointed out to staff  that the temporary stage was not wheelchair accessible. He suggested they needed  make alternative arrangements.

The council’s election team had to alter the set up so the results for Hoxton East and Shoreditch were declared from the floor, rather than from a stage.

He highlighted the problem and said he was not asked about accessibility needs before the count.

Mr Smorthit suffered paraplegic injuries when he plummeted 20ft to the ground in the accident. He  said he was not asked about any accessibility needs as a candidate when he told Hackney Council  he would attend the count.

He has competed in triathlons and marathons on two wheels  – many in fancy dress  to raise money for charity –  since completing the Hackney half marathon, and is a keen wheelchair basketball player.

He said: “Hopefully by highlighting it there won’t be a problem again.”

Council staff then rearranged the stage so he and fellow candidates were on ground level.

A spokeswoman said: “We’re really sorry this happened. It was an oversight on our part and we moved the podium on to the ground level for everyone, once we realised our mistake. We have apologised to Mr Smorthit both personally and privately. Subsequently we have taken the decision that for all future elections the results will be declared without a staged area.”

The election results for Hoxton East and Shoreditch ward, on a voter turnout of 24.49 per cent, were: