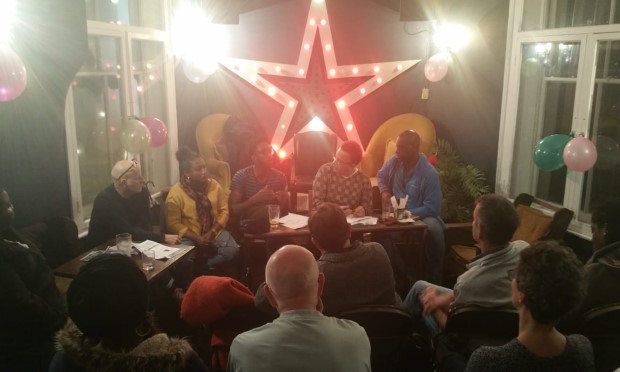 Unions are calling for local politicians to help them in their efforts to tackle an alleged pattern of discrimination and bullying within Hackney Council.

Representatives of the GMB, Unite and UNISON expressed their “disappointment” that no councillors were in attendance at a 17 December public meeting on the issue.

This is despite an 18-page report claiming abusive comments and behaviour on the part of Town Hall staff being sent to Hackney councillors and union members.

The unions are calling for other employees to come forward following the October dismissal of Natasha Johnson, Unite’s branch equalities officer, following her complaints of discrimination and harassment in the Town Hall.

Speaking at the meeting, Onay Kasab, regional officer for Unite, said: “I’ve been a rep since I was 18 or 19, and I haven’t yet seen a public sector employer, especially a local authority, behaving the way they are behaving as far as Natasha is concerned.

“Natasha was accused of making allegations of discrimination purely to harass the managers.

“It’s almost as if the Stephen Lawrence enquiry and the Macpherson report never happened and that we’ve gone back several decades.”

Johnson had raised complaints at her employment tribunal over a manager implying she was smoking marijuana at work, and being told: “If you haven’t got childcare, you shouldn’t be working here.”

The unions’ list of claims, first reported in the Hackney Gazette, include alleged slurs such as:

Steve Edwards, corporate rep for Unite, said: “Natasha’s case is not a totally isolated experience. The unions have worked well on this so far, but when we put our heads together, we found that this is an experience that other members were having, in different areas, but particularly in the call centre.

“The response moves because of the pressure and action we’ve taken as joint unions, Unite, the GMB and Unison.

“The politicians have divorced themselves from the actual reality, and they’re allowing the managers to take charge of the process. What the managers feed them, they eat it up.

“They have made it clear to us unfortunately that they are standing aside from this process at the moment, so we really are in a difficult situation here in Hackney.”

Notice of an independent review of working culture and practices in the housing contact centre and complaints team was given to council employees on 14 December, inviting all to share their views on the issues raised in a confidential and informal manner.

UNISON stated: “The issues [in the call centre] with first raised with the council in early 2018. It has taken over 9 months to get where we are today.

“If an ordinary manager had been accused of this alleged behaviour they would have been suspended and disciplined immediately. There shouldn’t be one rule for staff and one rule for managers.”

The unions have underlined the importance for the review to include former members of staff, some of whom were heard from at the 17 December meeting, where claims of a culture of “intimidation” and “counter-allegations” as a means of stifling complaints were voiced.

Former council employee Jabez Lam said: “The investigation must include former staff. I went through a similar experience as Natasha, when my head of division told my line manager they wished me dead.

“This created an intimidating atmosphere. Because of the use of non-disclosure agreements, my line manager was unable to be my witness.

“Eighteen years after the Crawford report [on racism in the council], Hackney is infested with the same racism, time and time again.”

Council papers relating to Lam’s formal grievance state that the head of division “acknowledge[d] [they] may have made a comment along the lines of a “death wish”, which [they] say would have been intended as an off-the-cuff and meaningless expression of frustration.”

The documents go on to state that the “death wish” would not be dealt with as a formal grievance, as “there is nothing to be gained by escalating the complaint further through to a formal process”.

Union reps for Hackney teachers as well as Lambeth Council were also present at the meeting and voiced their solidarity with the GMB, UNISON and Unite, who revealed their intention to escalate the campaign to a London-wide level.

Calls were also made for the re-establishment of an Independent Race Equality Unit.

Hackney Mayor Philip Glanville said: “All forms of bullying, harassment and racism are unacceptable and, if such behaviours are found to be happening in the workplace at the council, they will not be tolerated and action will be taken in line with the council’s policies. I have been assured that this is what is happening and will continue.

“In the Cabinet we have a member [Cllr Carole Williams, who met with unions in November] with direct responsibility for working with Trade Unions, who is always open to discussions with unions, and unions have the opportunity on a regular basis via the Council Joint Committee, to influence council policy such as how the council deals with complaints. Since I was elected Mayor I also have regular meetings with the unions.

“The council has made very clear to all employees that they should come forward and report harassment, and will be safe from reprisals if they do – this message was sent to all staff by the Chief Executive [Tim Shields] last month.

“We have appointed an independent person to investigate alleged issues and the unions have agreed to the terms of reference for the investigation, this work has just started and the report will be published next year.”

The council has stated that Shields, who recently wrote to staff highlighting the policies and the ways in which staff can report these issues, will be meeting with the unions in the New Year to discuss individual cases and to listen to concerns.

Edit – This article was updated at 11:58 on Friday 21 December to include a statement from UNISON.