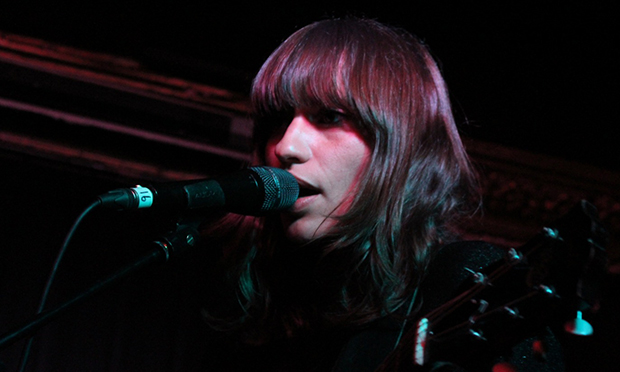 For me, it seems, Juniore have come along at the perfect time.

The band’s merging of garage, yeye and surf rock creates a unique and fresh sound, perhaps down to the fact that the latter two genres have never really seen a proper revival.

The 60s styled Victoria pub in Dalston is a perfect setting, packed to the rafters with a sell-out crowd, as well as a further mass of people congregated in the pub itself, just to attempt to hear Juniore’s seductive guitar lines leak through the walls.

The band floats onto the stage behind a mysterious cloud of dry ice, with multi-instrumentalist ‘Le Chose’ – translated as The Thing – adding to the mystery, cloaked in a silver mask ripped straight from a French avant garde film.

They smoothly introduce themselves with the chilled ‘En Cavale’ – not an obvious opener given its slow tempo, but it has the entire audience in the palms of lead singer Anna-Jean LeClézio’s hands. 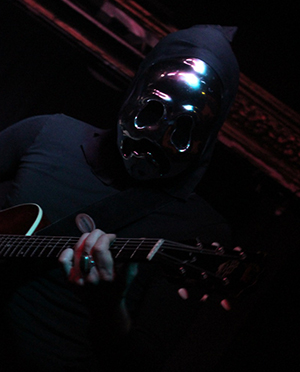 The masked Le Chose, or The Thing, on guitar. Photograph: Casey Cooper-Fiske

Some might assume a language barrier would cause problems, but that notion is put to bed within the first few words.

The passionate audience, French-speaking or not, listens to every word with as much care and attention as LeClézio puts into delivering them.

The upbeat ‘Marabout’ provokes sways and swings from the crowd with its jittering riff and driving drums perfectly complimenting the harmonising between LeClézio and drummer Swanny Elzingre – which keeps the crowd besotted all evening.

Smooth tones are replaced with rasping fuzz guitar as the band fire into the frantic ‘L’accident’, propped up by keys reminiscent of seminal garage group ? and the Mysterians.

‘A La Plage’ is seemingly the most popular song in the band’s repertoire, greeted with cheers and whoops as LeClézio explains the track was written about time spent at the beach.

The track playfully splashes the audience with flanger submerged guitar, while jovial keys convey a sense of humorous misfortune.

Within their first five tracks, the Parisians had demonstrated their wide variety of styles and influences, whilst keeping a unique signature of their own.

All of the tracks are sewn together by the infectious rhythms created by Elzingre, with the majority of the assembled struggling to keep themselves from tapping along.

Drummer Elzingre orders the audience to scream at the start of ‘Difficile’ following her “une, deux, trois, quatre” count-in. At the third time of asking, the desired effect is achieved and the paranoid organ floats on top of the fuzzy bass of Le Chose, who takes over from LeClézio on guitar for the second half of the show.

‘Difficile’ stands out as a highlight, with LeClézio’s angelic howls transformed into disco-style “oooh ooohs” at its climax. 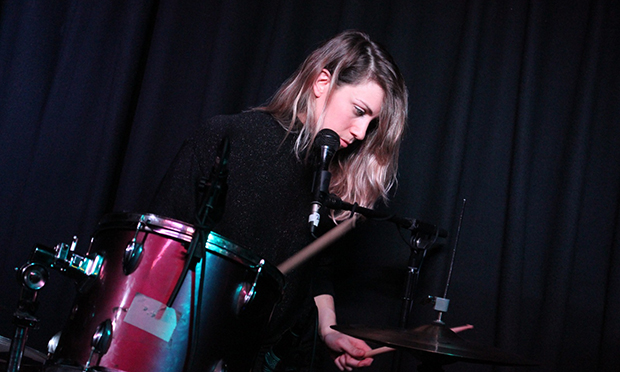 Another memorable moment comes in the form of ‘Panique’, where the vocal chemistry of drummer and lead singer is once again shown with mesmerising effect, as Elzingre breathlessly chants behind LeClézio’s lead vocals.

Despite forming in 2013, Juniore have only really made their mark in the UK this year with Magnifique, and this show proves that they are easily one of the most exciting bands to emerge this year.

Not only does their fresh and unique sound stand out, but their versatility in shifting style and tempo without breaking up the flow of the set is impressive.

It seems as if Juniore have arrived at the perfect time, not only for myself, but also for the rest of the crowd, who revel in being swept off their feet by the band – a warm show of Anglo-French unity in the current political landscape.