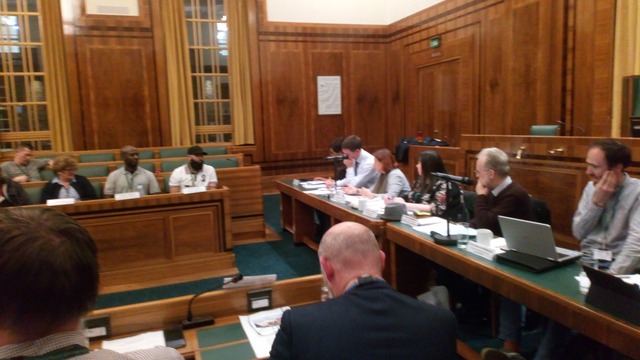 Case workers of children at risk of gang activity and exploitation have called on Hackney schools to stop excluding pupils in order to keep them in a protective environment.

Damion Roberts and Samir Khattab, who work for St Giles Trust’s SOS Project and were formerly involved in gang crime themselves, spoke out as part of an evidence-gathering session for Hackney’s Integrated Gangs Unit (IGU).

The borough saw 43 children permanently excluded from state-funded primary and secondary schools in 2016/17, a higher rate than any of the previous five years.

Roberts said: “I don’t want to take nothing away from teachers, because they do a brilliant job.

“Some of the kids are getting excluded for simple reasons, for three, four, five days at a time. In those days, that kid’s at home. Mum’s at work, dad’s gone off. Where do you think that kid’s going to end up?

“Then he’s trapped, and that is the problem. In terms of what can schools do – stop excluding them, it’s as simple as that. Work with them, communicate with the family, find out what’s really going on in the background.

“Young people gravitate to a life that’s exciting. We basically damp down that excitement part of it, because they’re not told about the other side, the violent side. The prison, the loss of families, the ruined lives.

“It’s not discussed out there, it’s more the money, the cars, you get this, you get that – they gravitate to that lifestyle.”

According to guidance from the Hackney Learning Trust, permanent exclusions should only occur as a last resort, as a consequence of either serious or continuous breach of the school’s behaviour policy, or if the student poses a risk of harm to other pupils.

Khattab added: “Remaining in a mainstream school is definitely a protective factor. One hundred per cent of the children that we work with [in our County Lines project] are in pupil referral units.

“I know that being in school is a protective factor for them who are one finger away from saying, ‘You know what? I’m not going to be a victim no more, I’m going to go gang full time.’

“One thing is definitely put in more outreach teams. They need to hear from a Hackney perspective.

“Someone like me who’s from West London, coming into their borough, it can be like, ‘What do you know?’ A Hackney perspective registers more.”

The 10 December meeting of the Living in Hackney Scrutiny Commission heard from a range of different partners within the IGU, which was set up in 2010 to respond to the escalating serious violence linked to gang criminality in Hackney.

Specific gun discharge is the only key aim of the IGU to have seen a rise in that period, of 25 per cent, or 5 offences more than the previous year.

Serious violence did see a spike recently in the borough, with six murders seen in Hackney in 2017/18 compared to two in the previous year.

The IGU’s analysis of the local features of the earlier spike in violence included a decrease in the age of those becoming involved in gang activity, as well as a more fluid environment on social media by which links were formed across the borough, alongside the already-established postcode-based groups.

The commission heard in particular of the effect on serious violence of social media, rather than drug-related violence.

Videos shared online or public comments via YouTube were singled out as stoking community tensions.

IGU researcher Steve Gowan said: “There was one area that was kind of a neutral zone, and a group of young people came up in that area.

“That wasn’t really expected, there wasn’t really anyone monitoring that area, with a lack of services. They have been in conflict with another group, older boys from a more established area.”

“I used to challenge the concept of me being in a gang, because for me looking at the portrayal of gangs in the media, I used to always say I ain’t no part of no gang, but by the definition, I definitely qualified.

“At the age of 14, I started to accumulate numerous offences, from common assault to ABH, and then at the age of 18, a situation took place amongst my peers where an argument took place and someone lost their life.

“I work with young offenders in Hackney that are gang-affiliated, and my objective is for them not to get to the stage, or even halfway to where I got to, but to choose another avenue.

“The two things I suffered from were low self-esteem and lacking identity. It’s helping young people to identify what there is to hold on to, and they have to be patient and be ready to hit some bumps in the road.”