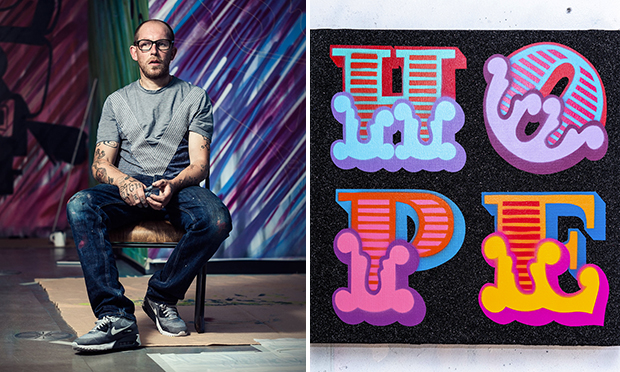 It is 20 years since street artist and longtime Hackney resident Ben Eine sprayed the letter ‘S’ on to a wall in London.

It was his first tag, and the start of a successful career which has seen him take his iconic typography to places like Paris and Stockholm, turn an east London street into “alphabet city”, and design the cover of the 200 millionth edition of the Big Issue.

One of Eine’s pieces, Twenty First Century City, was a gift from a prime minister to a president – David Cameron presented it to Barack Obama on his first trip to Washington as head of the UK government in 2010.

The artist was also called upon to provide an artistic response to the Grenfell Tower fire last year, which saw him paint the powerful words of poet Ben Okri onto 120 square metres of wall outside Shoreditch music venue Village Underground.

And in January, he spent weeks making a 17,500-square foot mural of the word ‘Create’ in an industrial space in Hackney Wick with the help of 30 volunteers and six fellow artists.

Ahead of his new solo show, Everything Starts Somewhere, at Stolen Space Gallery in Whitechapel, Eine told the Citizen about the letter ‘S’, his first foray into sculpture, and why artists make for powerful spokespeople.

“‘S’ was my first tag,” he said. “It can still be found in certain locations around London, mostly on shutters and walls.

“I see it as my first exploration into typography, so it’s deeply nostalgic and sentimental for me.

“This exhibition at Stolen Space honours that, and offers a chance to recalibrate and reflect on the last 20 years and my work to date.”

It is a version of the letter ‘S’ that best symbolises the show’s intertwining themes of reflection and renewal.

Eine has created a huge, two-metre tall sculpture of the character. It not only represents his starting point, but also, as his first venture into a different art form, an “exciting new direction”. 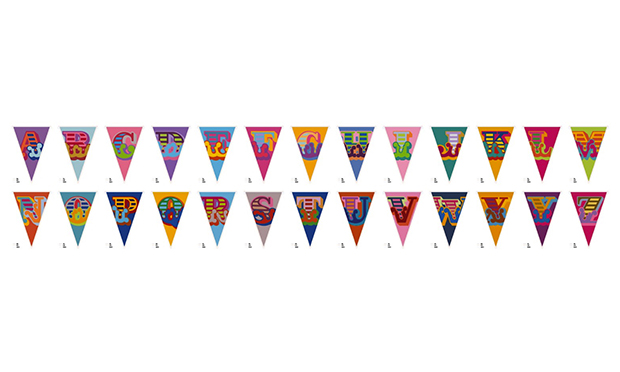 Eine has designed bunting for the show. Photograph: Isabel Almeida

The sculpture, to be accompanied by a specially commissioned poem narrated by actress Alice Erskine, will be the centrepiece of the exhibition.

It is designed to evoke word games, which fits with the playful, carnival atmosphere Eine is hoping to create at the gallery to match his trademark circus-style font – he’s even arranged for the space to be decorated with bunting.

But the transition to sculpture has been a “challenging one”, Eine reveals.

“The ‘S’ took over a year to complete,” he explains. “But working with skilled craftsman and fabricators in order to realise the project has probably been the most rewarding part.

“Sculpture has allowed me to push a key part of my practice.” 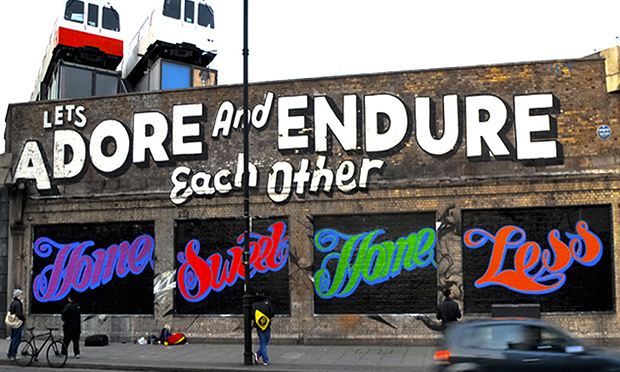 Eine’s reputation has led to his involvement in homelessness projects over the years – working with the likes of Shelter, The Mustard Tree and The Big Issue.

He is also one of a number of street art’s heavy hitters to donate their work to Sotheby’s, where it will be auctioned off next month to raise money for men’s health charity Movember.

Eine said: “I have a longstanding relationship with The Big Issue which has lasted for over 10 years. I am very proud of that.

“I designed the Issue’s 200 millionth edition cover, which was a huge highlight for me. The Mustard Tree and Movember have also been hugely supportive of my work.

“I’ve been loyal to these charities because I feel that homelessness and mental health are issues many of us are susceptible to – the saying goes that many of us are only two or three paychecks away from becoming homeless.

“This is particularly true in a city like London, one of the richest cities in world, where homelessness is endemic.”

Asked how artists can help raise awareness for societal issues compared to other forms of media cannot, Eine replied: “Art is a manifestation of lived experiences – that’s why artists can make such powerful spokespeople.

“Street art can be a particularly powerful art form because it’s there for all to enjoy – solely for pure enjoyment and mostly without any financial gain.

“This gives it a huge sense of autonomy.”

It is clear, in both his words and his work, that Eine is still deeply connected to where everything started for him.

Everything Starts Somewhere by Ben Eine is open from 26 October until 18 November.