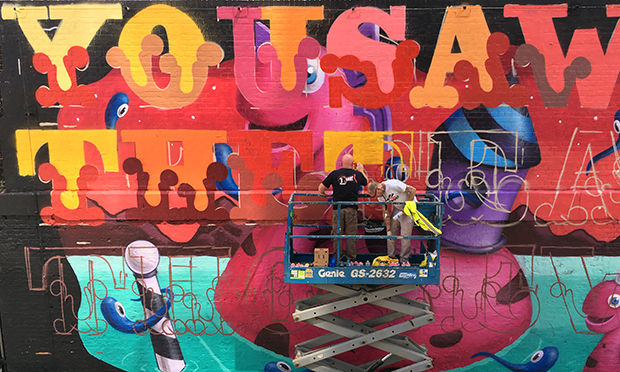 Poetry in motion: the mural being painted. Photograph: @PaintTheChangeGlobal

It is of course impossible to call it a ‘highlight’, but one of the most devastatingly insightful moments of the hundreds of hours of post-Grenfell fire coverage must surely have been Nigerian poet and North Kensington resident Ben Okri’s reading of his poem Grenfell Tower, June 2017 on Channel 4 News.

Now, the piece that Krishnan Guru-Murthy called a “stark and passionate cry from the heart” delivers its sobering message amongst the towers and flash of Shoreditch. 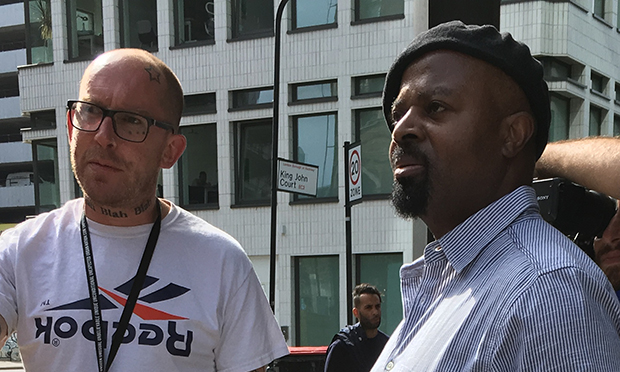 Okri, who captured the 1991 Booker Prize for his novel The Famished Road, was clear in his hopes for the mural when he spoke to the Citizen: “I want [the people of Shoreditch] to have a relationship with the outrage of the tower, the ongoing struggle for justice to prevail, and for all the issues related to the Grenfell disaster that need to be sorted out… Hackney’s got its own towers, we know them.”

“It’s a human thing, a really big cry. In this age in which we find ourselves, nobody has to be so poor that being alive is a risk, because of being poor. That’s just not acceptable anymore, anywhere in the world.

“Art can be very powerful as an instrument for peaceful change that we need in our times.” 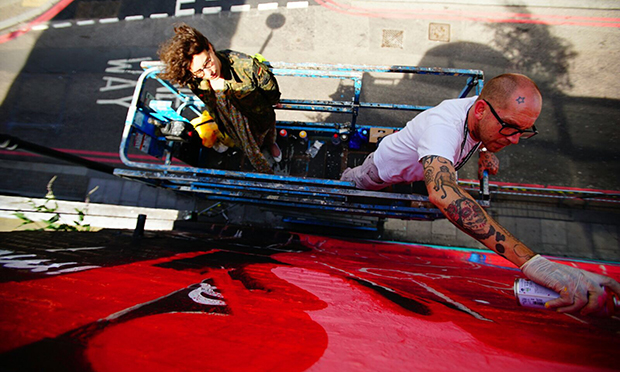 Ben Eine, fresh from a day of painting and spraying, said he was proud to be involved in such an “important and historic initiative”, adding: “Our hope for this mural, which we’re painting in response to the Grenfell fire, is that it will help keep this discussion alive and bring the victims and survivors out of the shadows so they can receive justice.”

Maziar Bahari, an Iranian-Canadian journalist and filmmaker whose Paint the Change organisation brought together the two Bens, shares in the still-raw emotion that runs through this whole project: “I couldn’t stop crying when I saw that had Ben Okri said it all in his beautiful poem.

“I repeated one line for days – ‘You heard it in the cries in the air howling for justice’. This mural is our attempt to share Ben’s poem with rest of the world. We wanted to have this wall close to the burnt tower, but the tower is already there.”

As well as its Channel 4 airing, Grenfell Tower, June 2017 was also published in full in the Financial Times.