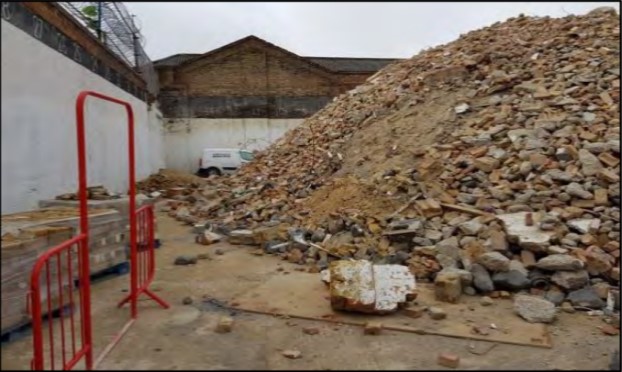 Campaigners in Hackney Wick have demanded greater say over development projects in their area after work was halted at a contaminated construction site.

The LLDC states “there is no safety issue for residents” and says it was aware in advance of the risk of the release of benzene and naphthalene from the historically contaminated land, which has been in industrial use since the 1800s.

Campaigner Peter Bennett said: “I have a massive problem with them saying that there’s no safety issue, when we don’t feel safe, we feel ill.

“We want to have full consultation with Telford Homes at a senior level about this whole development.

“This has exposed huge gulfs between the LLDC, the residents, and the developers. These gulfs need to be closed immediately, and should set a precedent for all developments in the future.

“Representatives from the community need to be involved at a high level to talk about how this project is going to go forward.

“The primary concern is public safety from benzene, which is an internationally recognised carcinogen, but this kind of leak has ignited an underlying anger within the whole community.

“If they are going to have community development planning, we want to be right in there with them, deciding what’s going to happen.”

As part of the conditions under which Telford may restart works, a revised methodology for excavation has been submitted to the LLDC’s planning department.

This includes an instruction to limit excavations to a 20×20 metre area, digging trial pits to test for contaminants, and to employ a perfumed misting system to lessen the smell of the works.

Telford’s original working bible contained guidance on what action to take when certain levels of volatile organic compounds (VOCs), including benzene, were found in the air by an onsite photoionisation (PID) gas detector.

It also laid out risks posed to both workers and residents by the contaminants present in the land, with groundworkers said to be at a “high risk” from hydrocarbon vapour, as well as elevated levels of methane and carbon dioxide and depleted oxygen levels.

The development company were originally advised by a report prepared by site investigators RSA Geotechnics to stop works if over 10 parts per million (ppm) of VOCs were detected, with “odour suppression devices” to operate at the site’s boundary.

RSA bases its advice on a “worst case” assumption that any PID reading taken on site would be made up of about 20 per cent benzene.

The revised working advice for the site is to “re-assess” the works if VOCs concentrations of 0.700 ppm are detected at the boundary.

According to government watchdog the Health and Safety Executive, the long-term exposure limit for benzene is 1 ppm.

The LLDC has revealed that contamination trapped at depth by a layer of clay was released by excavation, with the measures in place at the time “not resilient enough to control the release of the odours”.

Hackney Council, which has been receiving air quality reports from the site, has been asked by the Citizen to provide the findings, but had not responded by time of going to press.

The site has been in industrial use since the Victorian era, with the first plastics in Britain produced there from 1866. Vulcanised rubber, iron, rope, dye, and varnish were all produced within the area by 1870, with several works using noxious substances on Wallis Road.

A spokesperson for the LLDC said: “As the planning authority, LLDC imposed strict planning conditions to manage the safe removal of contaminated land from the Stone Studios site that are associated with historical land uses.

“We instructed the developer to stop work once the odour problem became apparent, and while there is no threat to public health, we do appreciate local people’s concerns.

“We are reviewing the developer’s revised plans to manage the site works and work to remove the contaminated materials can only begin once those plans have been approved.

“There is no safety issue for residents, however there are planned measures to mitigate the odour from the site.

“LLDC had prepared for the possibility of odours being released and the impact that might have. Approval of the excavation work was only given on the basis that works would be suspended should the odours be unacceptable.”

A director-level representative of Telford Homes and LLDC senior staff are due to meet with residents on the evening of 18 October.

Non-excavation works restarted at the site on 16 October.

Telford announced in April 2017 that they would be redeveloping the site to provide 110 new homes, of which 10 will be “affordable”.