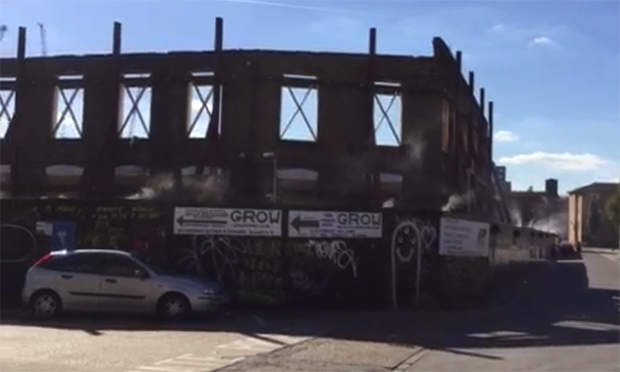 A property developer is bearing the brunt of residents’ outrage over the release of noxious fumes from its Hackney Wick construction site.

Telford Homes had halted works on its redevelopment of Wallis Road’s Stone Studios following complaints in September from nearby Mossbourne Academy of side-effects from inhalation of the fumes, including headaches and nausea.

Hackney Council have confirmed the cause as the historic contamination of the site’s land by hydrocarbons, including benzene and naphthalene.

Peter Hughes, Mossbourne Academy’s principal, said: “The smell was horrendous, and children were starting to feel sick. For us it was very simple – if the area was toxic, we had to shut the school.

“The conversation we had with Telford was, is it going to stop or do we have to shut the school?

“Young lungs are very different to older lungs with less resistance, so we need to know that any future works if they are to continue are going to be carried out in a safe way.”

The council has stated that their information “suggests that the causes of the odours are not expected to pose a significant health risk,” whilst Telford has said that the monitored levels in the air “were not toxic in any way, with no risk to human health.”

An environmental report submitted to the London Legacy Development Corporation (LLDC), which has responsibility over the site through planning, showed ‘high risk’ levels of naphthalene and volatile organic compounds in the ground, as well as a moderate risk presented by ‘elevated concentrations’ of arsenic and lead.

Naphthalene is classified by the International Agency for Research on Cancer (IARC) as possibly carcinogenic, with children more sensitive to its effects than adults. Benzene is a carcinogen.

Hackney Council have encouraged the LLDC to seek advice from Public Health England.

Local resident Alexandra Shipp said: “Wallis Road is my school run every day for my daughter to go to school at Mossbourne Academy.

“Since September, the smells coming out of the Telford Homes site were horrific. Children and parents were complaining of headaches, and it was unmanageable.

“Now we know that Telford Homes want to start their work again, and there are questions that we as parents and as a community need answered moving forward.

“LLDC is a public-sector organisation funded by the taxpayer, and therefore is accountable to residents in Hackney Wick. Residents have had months of disruption for the convenience of building unaffordable luxury homes.”

Telford announced in April 2017 that they would be redeveloping the site to provide 110 new homes, of which 10 would be ‘affordable’. 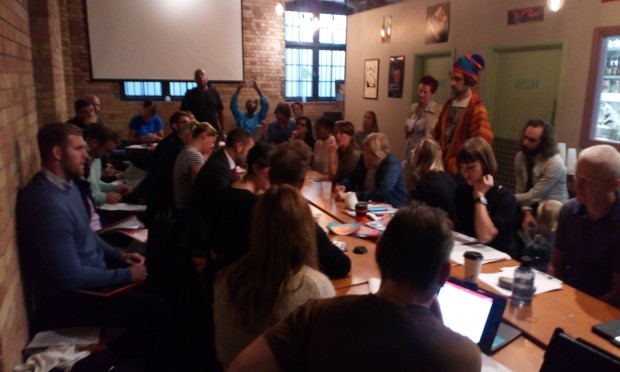 Representatives of Telford and the LLDC attempted to provide reassurance that pollution was at non-toxic levels at a 12 October meeting of the Hackney Wick and Fish Island cultural interest group.

However, there remained a lack of clarity by the meeting’s end over whether works would remain halted or not.

Telford had posted a notice on 9 October to the effect that permission had been granted to resume “some works” following a meeting with Hackney Council and the LLDC.

These included the completion of capping beam construction, without any excavation works.

Telford’s project manager Stephen Pedro stated at the meeting that the site was closed, with an “odour neutralising system” in effect.

Pedro said this would  “release a chemical with a kind of perfume which should help neutralise the odour to a certain extent. It won’t stop it, but it will help to suppress the odour.”

Attendees at the meeting complained that it was ‘disingenuous’ to refer to the discharges simply as ‘smells’ or ‘odours’ due to the level of discomfort they had caused, with one resident claiming that inhalation of the gases had caused them to have a headache for two weeks.

Pedro added: “Contrary to what everyone thinks in this room, we have not done anything wrong.

“Everything we’ve done has been agreed and signed off, and we’ve done it the correct way.

“Prior to us commencing works, we did our works methodology, which we submitted to the LLDC and Hackney Council. They reviewed it, and were happy.

“We’ve been taking readings of the air quality on the site boundary every day and sending it to Hackney Council, and [site investigators] RSA Geotechnics are doing passive air monitoring on the boundary every Friday.”

Catherine Smyth, head of development management for LLDC, added: “We’ve been aware of the issues that residents have been having, and we are as distressed by them as you are.

“The conditions you are experiencing are very, very low concentration and are not toxic or unsafe.

“Telford won’t be allowed to start works until we get to the bottom of the issue and make sure that we have mitigation in place.”

However, when residents asked Telford to shut off the odour suppression device, on the basis that this itself was releasing chemicals into the air, Pedro stated that whilst this system would be shut off, non-excavation construction works would be resuming on 15 October.

This provoked consternation in the room, with threats of ‘direct action’ heard to be made against the works.

When asked for clarity by the group, Smyth said: “We will have to talk with Telford Homes. We had stopped the work. The first I’ve heard they want to start is now.”

Local resident William Atkinson, chairing the meeting, said: “Clearly there’s a lot of disquiet in the room, and there’s a need for some concrete proposals going forward, as well as some explanation as to how we got to where we are.

“This meeting has clearly raised a number of very powerful and urgent questions which have not been answered.

“The clear message here is that there is real anger and frustration in this community which goes back over time.

“The only sensible way forward is to reconvene a meeting very quickly that will properly enfranchise all the voices in the community.”

Cllr Kennedy confirmed that it had been agreed that Telford would undertake no further excavation until a new methodology had been worked up, and requested that nothing happen on the site until then.

He added: “If Telford Homes take one thing back from this, they must communicate properly all their actions to the local residents. It’s the basic first fundamental.”

He added that the council would send a pollution control officer to any future meeting to address concerns around air quality in more detail.

Cllr Sharman also requested that Telford Homes field a “director-level” representative with overall responsibility for communication, as residents felt that Pedro had not had sufficient seniority to substantively answer their concerns.

The site has been in industrial use since the Victorian era, with the first plastics in Britain produced there from 1866. Vulcanised rubber, iron, rope, dye, and varnish were all produced within the area by 1870, with several works using noxious substances on Wallis Road.

A spokesperson for Telford Homes said after the meeting: “Once concerns were raised that the unpleasant odours coming from the site were affecting Mossbourne Academy we stopped work.

“We were working to an agreed method statement but unfortunately this did not prove to be resilient enough to control the release of the odours, which were further exacerbated by high winds.

“We are working with our specialist contractor and environmental consultant, LLDC and Hackney Council to enhance the measures to reduce odours for the remaining short-term excavation works.

“We will only restart work once the enhanced control measures have been agreed with LLDC and the Council to keep any nuisance odours leaving the site to an absolute minimum.

“We have also agreed to install an air quality monitor at Mossbourne Academy to monitor the air for odours for as long as these short-term remediation works continue.

“We will continue to update local residents and site neighbours on the progress of these works.”

The LLDC were also contacted for comment, but had not responded by time of going to press.