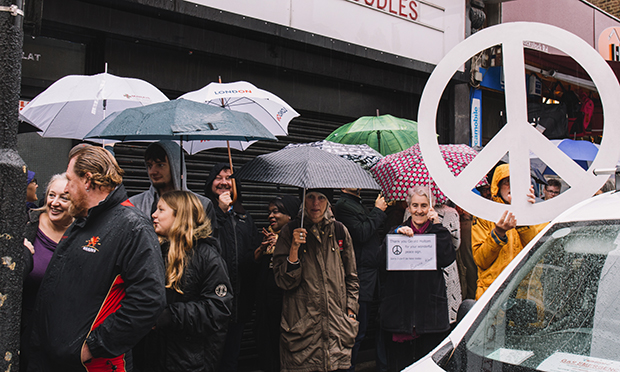 Campaigners, politicians and members of the public gathered earlier this month for the unveiling of a plaque commemorating the creator of the iconic peace symbol.

Sixty years ago, British artist Gerald Holtom first presented his iconic design – the famous circle with three lines – at Fish & Cook Stationers on Blackstock Road, to his colleagues in the Direct Action Committee against nuclear war.

Now, as part of a project by the Town Hall to honour historical figures and events in the borough, a brown plaque has been installed on the wall of the same building.

The late artist’s daughter, Anna, said: “Our father, and so many others, are terribly proud of the peace symbol that he designed and helped bring to the world.

“I had no idea, when I was 14, how massive this symbol would become. I still remember stapling dozens and dozens of the symbols on to sticks for their first outing.”

Rosie, Holtom’s great-niece, added: “Our family are proud of Gerald’s iconic design and how it’s become a symbol of hope and peace around the world.

“I’m happy we finally got this plaque made and I am grateful to everyone who has helped and supported it along the way.”

Holtom’s logo was based on semaphore for the letters ‘N’ and ‘D’, and also drew inspiration from an anti-war painting by Spanish artist Francisco Goya.

In 1958, he publicly showcased the design at the first London to Aldermaston march, when thousands of people protested against Britain’s production of the atom bomb.

The symbol was adopted soon after by the Campaign for Nuclear Disarmament (CND) and has gone on to become one of the most widely recognised designs in history.

Speaker Cllr Potter said: “Hackney has a long history of being a home for radical thought, from the dissidents buried at Abney Park Cemetery to the conscientious objectors of the CND movement.

“It’s great that we can celebrate this heritage by acknowledging the local origin of the world recognised peace symbol designed by Mr Holtom.”

She added: “This iconic symbol, three lines and a circle, has gone on to symbolise freedom and justice for over 60 years and I’m sure many more years yet.

“To our wonderful, diverse local community in Hackney, Haringey and Islington, I hope it represents hope for a peaceful world for many generations to come.”

To find out more about the council’s plaque scheme, head to hackney.gov.uk/plaques