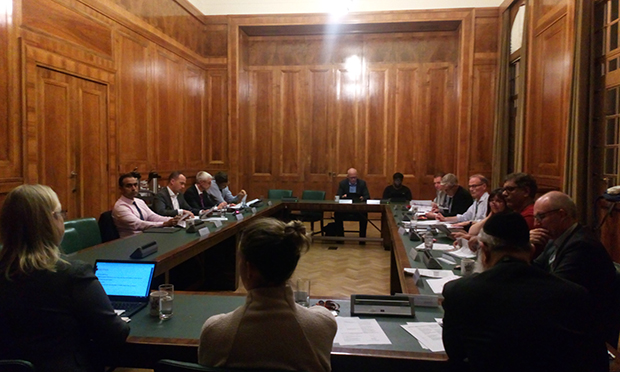 Hackney Council is bracing itself for what it characterises as Brexit’s potentially “catastrophic” impact on its finances and employment structures.

The increasing odds of a no-deal in Brexit negotations has prompted council risk advisors to rate such an outcome as “likely” in a report presented to the audit committee meeting on 15 October.

Corporate risk advisor Matt Powell, who authored the report, said: “There is still so much uncertainty with this.

“I hope the committee will be assured that the council is taking account of all possibilities, but at this stage, we are still uncertain, so this is being constantly discussed at the top table.”

The report emphasised that officers are “constantly discussing” Brexit to attempt to address and negate its impact, as well as giving consideration to pricing fluctuations when planning purchases and commissioning services.

The council’s risk register takes into account the achievement of strategic priorities, the health and safety of its employees, residents or service users, its ability to deliver key services and the financial and reputational impacts on the Town Hall itself.

Consideration was also given at the meeting to the anticipated simultaneous impact to the Council’s service delivery from the roll-out of Universal Credit, as well as the similarly high risk of volatile markets delivering a hit to the Town Hall’s pension fund.

Universal Credit was introduced in Hackney earlier this month for new claimants or those whose circumstances change, but is now not expected to be fully operational across the UK until 2023.

Cllr Nick Sharman, (Lab, Hackney Wick), who chaired the meeting, described such a combination of factors as potentially “chaotic”, and quizzed officers on what was being done to prepare for the worst on Brexit.

He said: “We can’t do much about the Brexit negotiations, but what we can do is keep a really close eye and have plans to cope with things that are likely to happen.

“It’s not just going through the risks, but to make sure that underneath that you have the ability to respond in each of the key areas.

“In the event of a no-deal Brexit, we could lose very significant numbers of our frontline staff very quickly, and we ought to know what we do in those sorts of cases.

“So we need to have thought about it, and have some sort of options for action.”

The council’s analysis of a no-deal scenario raises fears about a loss of employees from EU27 countries, as well as a further fall in the value of the pound leading to its finances taking a severe beating.

The report cites losses already experienced by the authority in its ICT purchases, which are made in dollars, and states: “There may not be budgets to cover the shortfalls that a weak pound produces.”

Ian Williams, Hackney’s group director for finance and corporate resources, attempted to reassure the audit committee that the council was giving consideration to every eventuality.

Williams said: “We’re looking at things that might impact on Hackney, so have we got an exposure in terms of our staff, and making sure we’ve got necessary support mechanisms in place.

“It has massive corporate implications given the timing of this with where we are in the roll-out of the welfare reforms of Universal Credit.

“Equally, it’s understanding if there are any European funds that might be at risk.

“It’s about making sure that various service directorates like trading standards have in their business continuity plan a section that looks at Brexit, and to make sure they’re following guidance issued by various central government departments to have what they need in place should there be a particular type of Brexit.”

Williams also pointed out that the council was looking at the potential impact of a cliff-edge Brexit on supply chains of subcontractors working with the council, and what effect this could have on Town Hall projects.

← Telford Homes announces restart of works at contaminated site‘Where there’s a will, there’s a way’: Urswick head on how the school provides free meals for all →