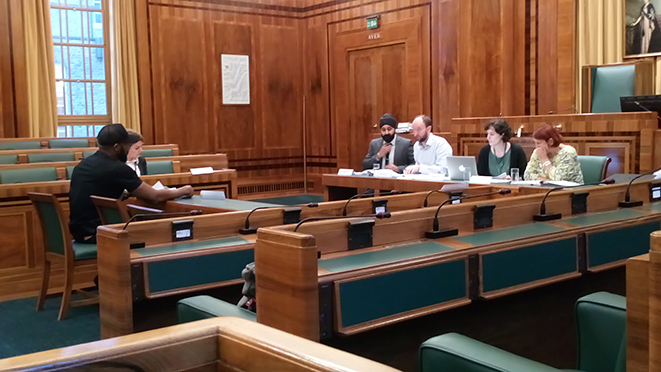 Three applications were decided at the 23 August meeting, including a Stoke Newington cafe/restaurant in the Dalston Special Policy Area (SPA), a former barber on Mare Street converting to an off-licence, and a licence for outdoor  events sought by the Geffrye Museum.

Speaking after the meeting, councillors maintained that their experience of enacting licensing policy was unchanged by the controversial restrictions, which include “core hours” clause stating new venues must close at 11pm on weekdays and midnight on weekends.

Cllr Sharon Patrick (Lab, Kings Park), when asked if the restrictions had changed how the committee was run, said: “No. The restrictions aren’t about stopping fun. A lot of misinformation has been put out there.”

Cllr James Peters (Lab, De Beauvoir), who chaired the sub-committee, said: “The restrictions are not a blanket policy. Every case is decided on its merits.

“In fact one of these cases comes under the Dalston Special Policy Area, and that application was granted.”

The Dalston SPA, established after a public consultation in 2014, is a framework under which late-opening venues are required to demonstrate they will not have a negative impact on the area through the high standards and track record of management, as well as a statement of good character by the applicant.

None of the venues applying for their licences at the committee pushed for the right to serve alcohol beyond 11pm.

Famous, the venue applying to open in the Dalston SPA, aims to be a café/restaurant serving “artisan” food, as well as beer, cider and UK wines.

Its initial application asked to serve alcohol from 11am-11pm, and had attracted nine objections and a petition from residents against its opening.

However, having altered its application to serve alcohol between 11am and 7pm, as well as guaranteeing a capacity of 40 with a limit of four smokers outside the premises, its application was granted.

Licensing agent Graham Hopkins spoke in support of Famous’ application: “Famous wants to fit into the area, and into the licensing framework that Hackney is trying to do. It wants to be a place people want to go.

“This venue will serve beer, cider and wine only, with a substantial menu available.

“It is going to be food-led, with alcohol strictly ancillary to the sale of artisan food, with wines sourced from the UK.

“The price of a single bottle of beer will be between £6 and £7. It is not a cheap venue. Most customers will be work people on their break and mums out on the school run.”

The petition against Famous’ application before the committee had over 50 signatures from residents of Foulden Road.

A cover letter read: “We object to the potential for increased crime and disorder and the already untenable disturbances on the street due to late night revellers leaving local establishments.

“There are concerns around public safety with increases in crime due to drunken behaviour in this area.”