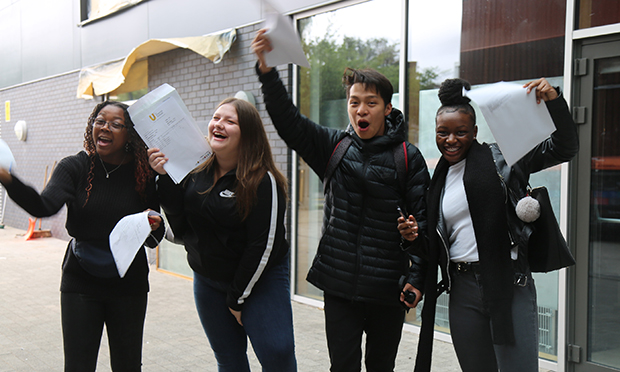 Nail-biting times for students across Hackney today as they take time out of their summer break to pick up their GCSE results.

It is the second year of government-led reforms which are designed to make GCSEs a greater challenge, with more weight placed on final exams rather than coursework.

In England, the numerical grading system introduced last year for maths and English is now in place for a further 20 subjects, including science, history, geography and modern languages.

The numbers and letters are not directly comparable, but a 9 is the equivalent of an A*, and a 1 is effectively a G.

For students to pass a GCSE, they will need a 4 – roughly the same as a C grade.

The changes were brought in under former Education Secretary Michael Gove in the hope that they will create a greater distinction between students.

Despite all the turbulence, pupils at The Urswick School are flying high, with 64 per cent achieving five or more grades from 9-4.

Stand-out performer Anh Vu scored 9s in science, maths and history – putting her in the top three per cent in the country in those subjects.

Anh said: “I am so happy with my results, thank you so much to all my teachers.” 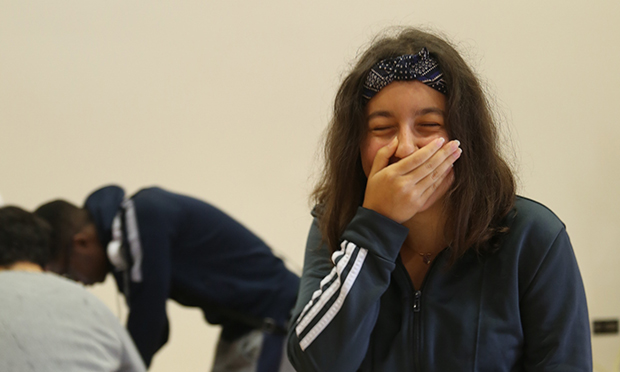 Gobsmacked: Ilke Delice after getting her grades. Photograph: Urswick School

She said she is “relieved that my hard work has paid off”, adding: “I’m so thankful to the teachers here
at The Urswick who have helped me achieve my wonderful results.”

Head girl Chloe Chilvers let out a few tears of joy after getting her maths result.

“I am so happy I passed. I just can’t believe it,” she said. 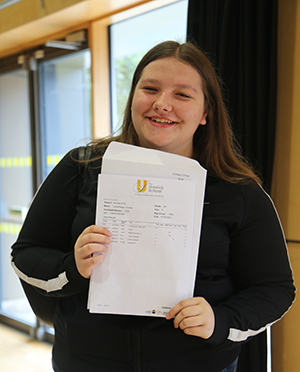 Headteacher Richard Brown paid tribute to staff and students, saying: “These are completely new GCSEs, with much more difficult content and the new 9-1 grading system.

“Our students worked hard and showed a great deal of resilience when taking anything up to 30 hours of different exam papers. I am delighted with their successes and also congratulate our staff on the skilled way they have delivered the new exam syllabuses.”

He said he has no problem with exams getting tougher, as long as people remember that comparisons with past results are “pretty much invalid”, adding: “However, it seems to me entirely wrong that 16-year-olds who go to independent schools are often being allowed to avoid the new, more difficult, exams, by taking something called the iGCSE, a qualification that is not open to state school children.

“It is for the government to explain why they have allowed this inequality and unfairness to take place.”

Brown said he was proud of his students, I am proud of all our students, some of whom come from disadvantaged backgrounds and have special educational needs.

“What I want for our children is a level playing field,” he said. “That is why everyone at Urswick works so hard on their behalf.” 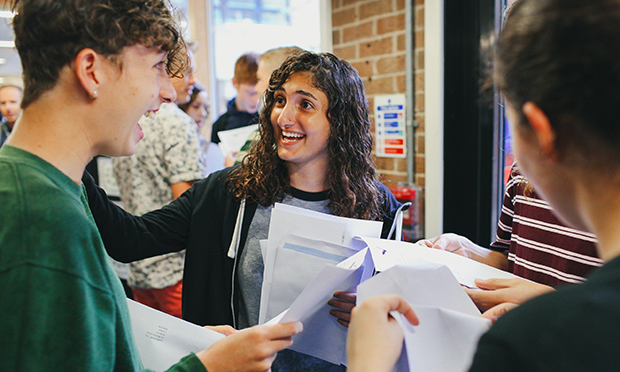 Stoke Newington School students have also taken the reforms in their stride, with nearly 80 per cent gaining grades from 9-4.

Fifty-two per cent of them achieved a grade 5, somewhat controversially known as a “strong pass”, in English and maths – 10 per cent higher than last year’s national figure.

There were 89 new top level 9 grades across all subjects – with three students gaining a 9 in both English and maths.

And pupils excelled in creative subjects, with the school posting an “excellent” set of results for art, photography, media, music, drama and textiles.

Headteacher Annie Gammon, who is set to take up the role of Hackney’s Director of Education next month, said: “We are very proud of our year 11 students – every one of them.

“We know that they are ambitious for their achievements; they worked hard and have been well taught and supported by our teachers.

“We continue to have excellent results in our creative subjects, as well as students achieving well in the fundamentals
of maths and English. We are really pleased with their success.” 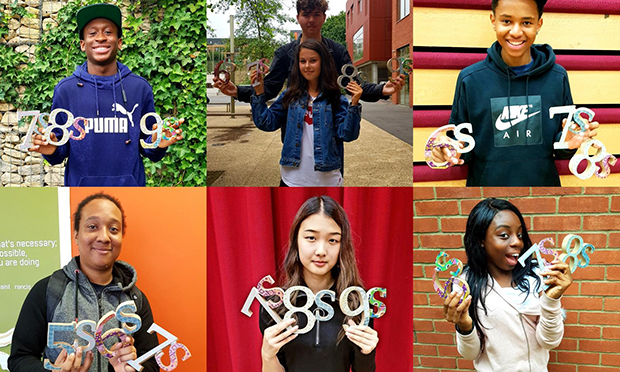 They again performed above the national average, and 64 per cent earned a 4 or above in maths and English. 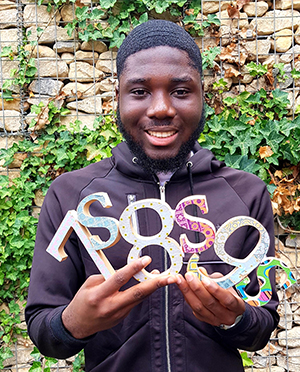 Derecash said: “I’m relieved and excited! Both the students and teachers never gave up. Thank you particularly to Miss Ingrey and Mr MacNaughton.”

He says he will go on to study biology, chemistry, maths and psychology at A-level at Cardinal Pole.

Executive headteacher Jane Heffernan said: “It is wonderful to be able to share such good news. At GCSE, our Year 11 students celebrated with improved results for the fifth year in a row, many securing the highest grades.

“These grades are a testament to the hard work of all involved in the school and I am delighted that all our efforts have paid off.” 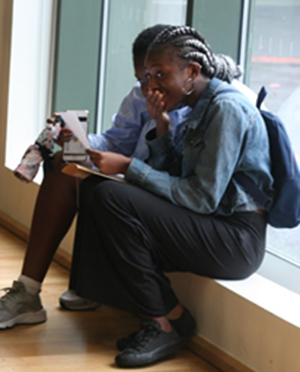 Faith Babatunde, despite missing around a fifth of her classes in Year 11 due to medical issues, managed to pick up three 9s, three 8s, two 7s – as well as an A in Madarin, which is still graded in the old format.

Faith wants to read medicine in the future, and will take chemistry, biology, physics and psychology at A-level.

Another star was Marie-Eunice Kouassi, who achieved exactly the same grades as Faith – 99988877 and an A in Mandarin.

Marie-Eunice learned how to speak English in just one year when she arrived from the Ivory Coast in 2012.

Emma Owens had an unfortunate outbreak of chicken pox during exam time.

Despite having to sit in a separate room because she was contagious, Emma earned 99888876 – to go with an A in Mandarin.

Forest School today announced its best ever set of results, with 77 per cent of grades at 7, or A, and higher.

Ninety-one per cent of English results were one of the top two grades. 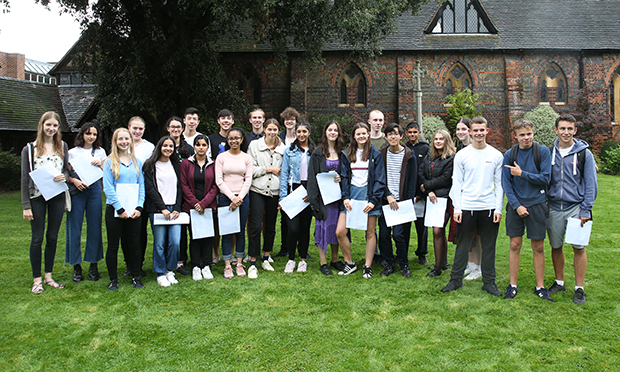 “This is a tremendous cohort of sparky pupils who have worked hard and been ambitious for themselves. These stunning results are thoroughly deserved. I am very proud of them.”

Deputy Head Academic Tahmer Mahmoud said the results, in “new, more challenging papers”, are a “testament to our
pupils’ hard work and commitment”.

Staff and students at Petchey Academy are delighted after outperforming both the national average and last year’s results.

Ten per cent of the year group achieved seven or more GCSEs at grade 7 or above, and 68 per cent of pupils earned five or more grades at 4 and over.

Principal Olivia Cole said: “We’re extremely pleased with our results this year as our students have not only outperformed the national average in terms of the number of students achieving 4 or more GCSEs at grades 4 and above, but we have also exceeded last year’s results in almost all areas too.

“The changes to the GCSEs have made it a challenging year for students and teaching staff alike which makes our success even more pleasing.” 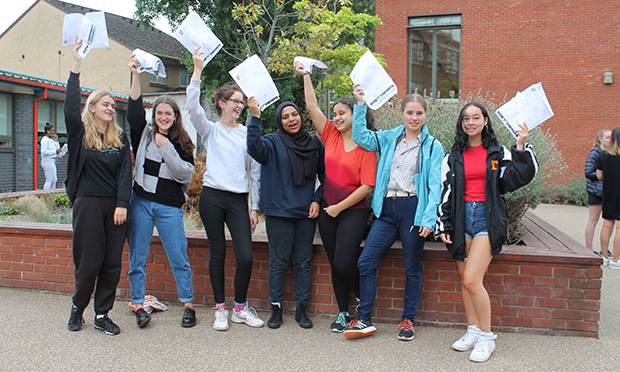 Seventy-eight per cent of pupils at Clapton Girls’ Academy gained a grade 4 or above in English and maths.

The school said that despite widespread concern that students achieving top grades would fall dramatically, 7 per cent of all its grades in English and maths a grade 9 – exceeding the national average of 3 per cent. 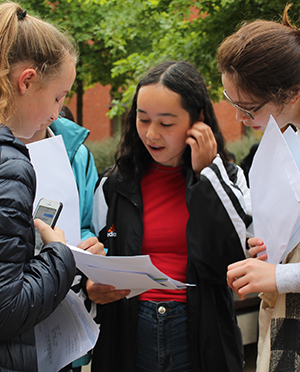 The highest performer was Miwa Tatsuhara, who earned five 9s and five 8s, as well as an A*.

She said: “In all my years at Clapton this is my proudest moment – getting these grades! Clapton’s supportive and comfortable environment gave me the push to work hard and be so successful.”

Tanya Ahmed, who was another stand-out with 9999998888, added: “Clapton really helped me progress as I was so shocked to see a grade 9 in French when I was predicted a 6. I’m so proud of that! I can’t wait to join the sixth form.”

A “delighted” headteacher, Anna Feltham, said: “This year’s incredible progress is a result of the girls’ exceptional work ethic and the unfailing commitment of our amazing staff.

“Our students and staff have shown great resilience when rising to the challenges of the new more rigorous GCSE examinations.

“I look forward to seeing more outstanding results from this cohort as they move into our thriving sixth form.”

North Bridge House Senior School is celebrating its best ever set of results, with 55 per cent of grades 7 or above.

Ninety-three per cent of pupils received a “strong pass” of 5 or over in English language, and 91 per cent in maths.

Students achieved an impressive number of top grade 9s in the sciences – 55 per cent in biology, 46 per cent in chemistry and 37 per cent in physics. 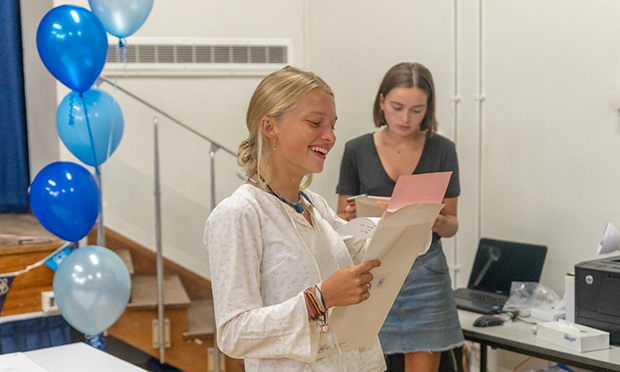 The school’s head Brendan Pavey said: “I am absolutely delighted for the class of 2018!  They are a wonderful set of students and to achieve outstanding results is nothing less than they deserve.

“They have been brilliantly well supported by a fantastic set of teachers and I could not be more proud of their achievements.

“It has been a privilege to watch the dedication of them all and to see their beaming smiles when collecting their results this morning.

“Congratulations to everyone – children, teachers and parents!”

Skinners’ Academy is another school which has broken its results record this year, with 78 per cent of students achieving five or more GCSEs at grades 9-4.

Twenty per cent of all grades were 9-7, and 100 per cent of pupils were awarded a pass – 4 or above – in subjects including biology, physics, art and further maths.

He said: “I’m pleased to have achieved grades which give me lots of choices about what to study next and what career to pursue in the future.

“I appreciate the teachers at Skinners’ Academy and am looking forward to studying subjects I enjoy at A-level, including chemistry, physics, maths and further maths, in the Academy’s sixth form.” 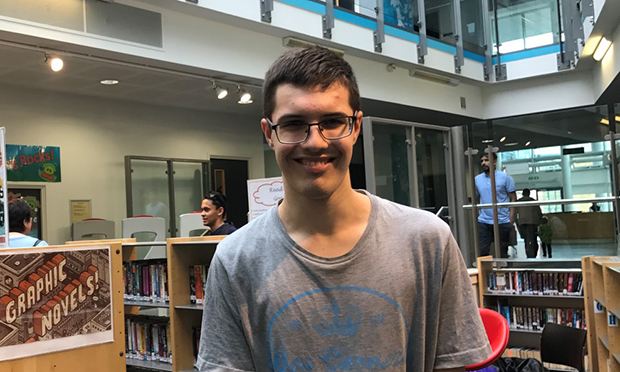 Principal Tim Clark praised staff and students for their hard work, and added: “It’s exciting to see the Academy’s motto of ‘Be the best you can’ in action with this cohort of pupils, who have not only done themselves proud academically but have also thrown themselves into enriching activities, such as the Duke of Edinburgh programme – more than 85 per cent of this particular year group achieved the Bronze Award – and music performances, including with the National Youth Orchestra earlier this year.

“Skinners’ Academy is currently the only Hackney school to offer free music lessons to all Year 7 pupils and we look forward to celebrating similar academic and non-academic successes in the coming years.”

In the reformed GCSEs in England, 4.3 per cent of the results in reformed GCSEs were grade – which requires a higher mark than the previous A* grade.

Only 732 students in the country achieved a clean sweep of 9s.

The proportion of pupils in England earning a C or 4 grade in all subjects rose to 66.6 per cent – up from 66.1 per cent in 2017 – with improvements among both boys and girls.

School Standards minister Nick Gibb said: “Congratulations to all the pupils getting their results today. All of their hard work – and that of their teachers – has paid off and I hope that this is the first step to a bright and successful future.

“Whatever they choose to do next – whether it is staying at school, going to college, or starting an apprenticeship – these qualifications will give them a solid base of knowledge and skills that they can build on.”

Referring to the ongoing GCSE reforms, the government’s exams watchdog Ofqual said that “students picking up their results today can be confident they have achieved the grades their performance deserves”.