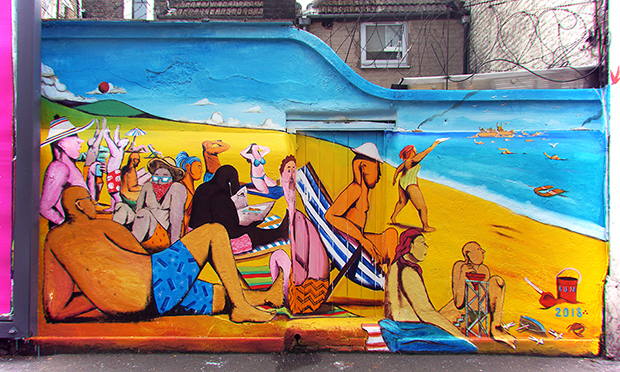 An international street artist has unveiled two self-funded murals in Hackney which take aim at modern distractions – and did so with a swipe at east London’s increasingly corporate graffiti scene.

The work of Giacomo “RUN” Bufarini, an Italian who lives in the capital, can be seen on city walls as far afield as Senegal and China.

But you won’t have to catch a plane to see his latest pieces – both can be found just around the corner in Clapton.

The first mural, on Downs Road, depicts a beach scene with immigrants desperately trying to swim to shore as oblivious holidaymakers enjoy the sun.

The second, on Linscott Road, shows what RUN calls the “de-evolution” of a human being, with a busy commuter slowly morphing into a monkey hypnotised by an iPad inside a metal cage. 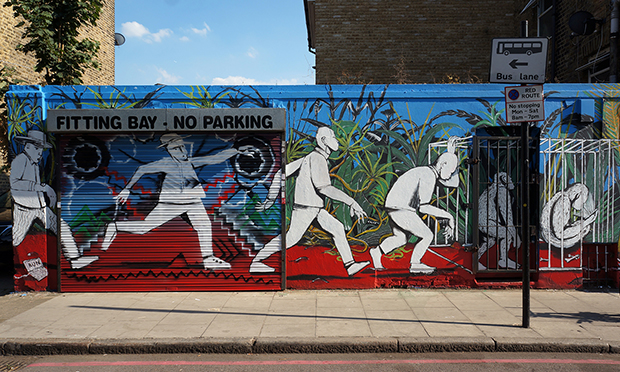 ‘Regressing’: the ‘de-evolution’ of man on Linscott Road. Photograph: RUN

The paintings are self-funded and, according to RUN, a nurturing of walls that were “abandoned and forgotten”.

He says the owners of the two façades agreed to let him paint on them several years ago, and since then he has updated them regularly.

“Since I began, people have been enthusiastic and happy that someone has offered their effort and love to colour and brighten up the area. But it is not just about beautifying the street.”

The new murals both make a point about modern distractions.

Referring to the immigrants in his beach scene, RUN says: “Some of them make it, other don’t. It’s a sad and very dangerous reality for many, but a reality that most of us in our comfortable lifestyles only witness through the TV, the radio or the internet.”

And on the second mural, which shows the “de-evolution” of a commuter into a monkey, RUN adds: “He has regressed and devolved all power to the screen.

“It is a painting that begs the question: how evolved was the commuter in the first place? Running from one thing to another without stopping to reflect on what is actually going on around him.

“It is a statement of how we are in the big city, running around crazily without any awareness of our surroundings.” 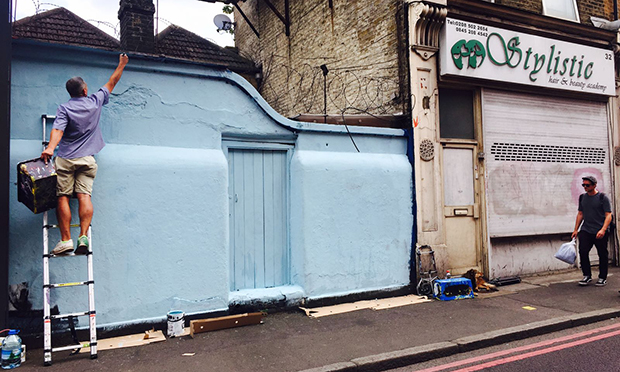 RUN says the murals also “represent liberation from the constant advertising images that dominate our lives”.

“Street art is freedom of expression – it is a symbol that releases us from the domineering images that we mundanely and without choice are exposed to daily.”

RUN started out by painting on lorries and trains when he was very young, and created his first major wall mural in 2003.

In 2013, he got the opportunity to decorate the famous Village Underground wall in Shoreditch.

But he is concerned about the current street art scene in east London, describing it as a “jungle”.

Huge corporations have leapt on the growing popularity of graffiti in places like Shoreditch and Hackney, paying street artists to paint adverts.

RUN says: “There are lots of different individuals and crews that follow their own goals. Some of them like to go corporate and help sell products, and others are more into their own work and won’t compromise to anyone else. 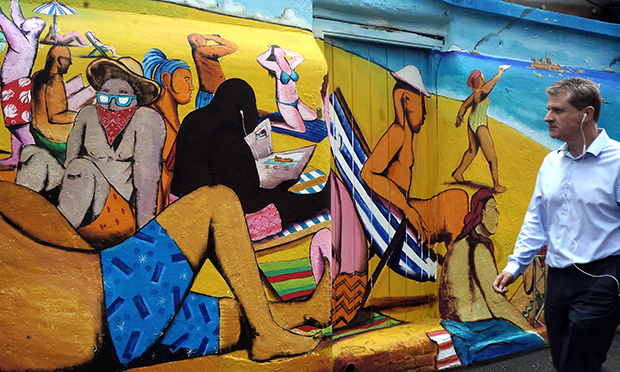 ‘Attentive’: a passerby takes in the beach mural. Photograph: RUN

He says street art was once an underground scene that is now fashionable and widely accepted in east London.

Gentrification is partly to blame, he adds, because it leads to a “lacking sense of community” that is papered over by art.

“Actually, to be more cynical, the acceptance of this art form has more to do with the fact that it’s a lucrative tourist attraction for hipsters who like a bit of ‘living it up rough’ and having these kinds of paintings in the background.”

It has come to a point where RUN says passersby are “dumbfounded” that there is no advertising behind his art, “no corporation funding me”.

But he takes heart from the fact that people are still interested in his art and what it’s about.

“While I paint, people cheer – they are astonished, they say nice words from their cars while they wait at traffic lights.

“For me it is a huge satisfaction to know that some people are still attentive to what is going on in their city.”