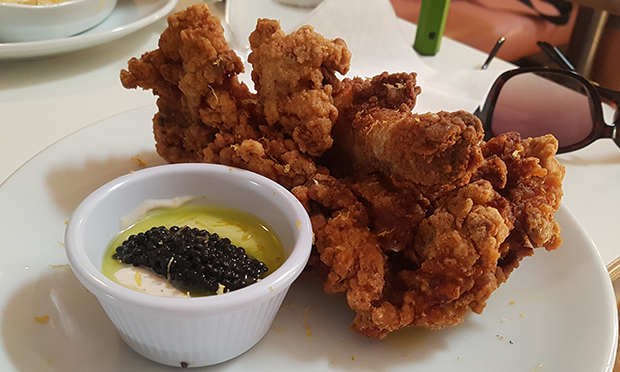 Carte Blanche, the new Mare Street restaurant from Le Bun co-creator Andy Taylor, is not out to make friends easily.

The name sounds like something from Miami Vice, so it’s no surprise to find retro vintage skateboards on the wall and INXS on the sound system.

You think they’re pricey and out of step with a relatively deprived part of the borough? Chow down on their fried chicken and caviar.

And what’s more, the main vegan option is called ‘Fucking Vegans’, in effect swearing at my girlfriend before we’d even had a chance to sit down.

As in many of the nearby pubs: them’s fighting words.

Another minor assault follows – the air-con isn’t working, which isn’t great luck when you’re opening during a heatwave.

However we’re sat near a huge fan inside the classily hued, high-ceilinged dining area, which has the benefit of wafting deliciousness around the room once Taylor and his chefs get to work. 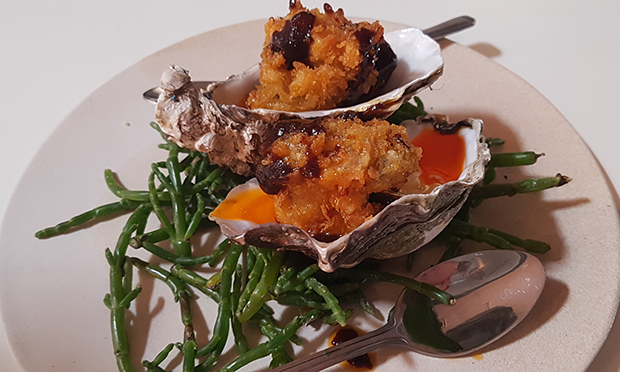 Pearler: the oysters went down a treat. Photograph: Andrew Barnes

I start with a pair of fried oysters, with my Fucking Vegan partner going for cauliflower buffalo wings (£3.50 per oyster and £5 respectively).

Sometimes it feels like fried oysters are a way of getting rid of all that troublesome oysteryness – the essence of the thing that nonetheless puts some people off – but these ones wear their barbecue sauce and crisp batter well, and are paired with plump, salty samphire.

The ‘wings’ were also deeply satisfying – the buffalo sauce is so spicy and plate-lickable that they didn’t even need to get the texture as bang-on right as they did.

Another ‘starter’ (albeit a pricier one at £9) also wows – the steak tartare, which as almost-raw beef you’d think would be hard to pull off in weather that feels like it’s cooking any exposed human flesh.

Its pickle-y notes sing, the beef is first-rate and juuust tickled by the dashes of citrus and occasional crunch of sea salt.

The accompanying beef fat crisps are not particularly notable, but that hardly matters – this is a perfectly flavoured tartare that sticks around on the palate and in the mind, and is illustrative of the cooking skill on offer at Carte Blanche.

Which is why the main event of our meal is a slight let-down. 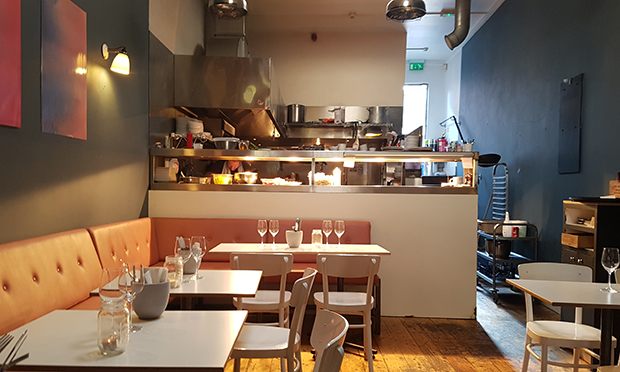 For what it’s worth, I deliberated over whether to get the skate wing or the fried chicken and caviar.

I suspect I should have gone for the fish – it’s a platform for Taylor to show his mastery of butter (in a noisette with capers) and incorporates Maryland’s famous export, Old Bay spice and herb seasoning, which gets raves across the American internet and which I’m desperate to try.

But the chance to try something so ludicrous doesn’t come every day, so I find myself presented with a heap of fried chicken and a pot of caviar-topped hollandaise.

At first, I spread a bit of the caviar mix onto it, with a delicateness of movement that I haven’t displayed at any of Mare Street’s other chicken shops.

I’m soon spooning it directly into my mouth in between bites of chicken, searching in vain for what exactly this adds to the dish, besides a couple of notes on its £15.50 price tag.

At least I know what’s coming though – the Fucking Vegan is undefined, with a plan for it to change day-on-day.

Fair enough I suppose, variety is the spice of life and all that, and it turns out to be a zesty but unmemorable beetroot and tomato, uh, thing (Salad? Pile?). 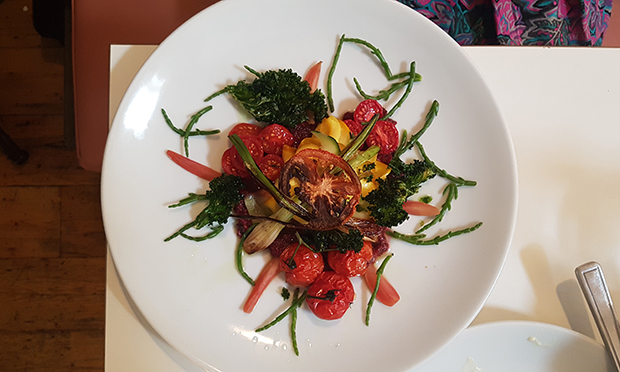 But if you eat vegan and shell out 14 quid for the privilege of being sworn at, before receiving a shruggingly defined plate of whatever veg they feel like serving you, I feel like you have a right to be irritated that outweighs any attempt at cheekiness or, ugh, edginess.

I don’t mean to damn out of hand here – as I said, there’s some great dishes here.

I bet the aforementioned fish is excellent, and the cocktails are excellent (we plumped for Meantime beers, too hot for faffing about), and I also bet the puddings (including a tarte tatin made with the love and care any chef trained in French techniques, like Taylor, can deliver) are excellent too.

The burgers that made Le Bun famous and scored them high-profile plaudits (including a collab with singer-turned-chef Kelis) are on the menu and definitely still at that highpoint.

If Carte Blanche goes for a more thoughtful interpretation of its own name – building on the inherent freedom to cream off the best of French and American cuisine to its own creative ends – and cuts out the gimmicks, they’ll better connect with Hackney, and all those who sail in her and want a blow-out, cardiologist-worrying meal with true finesse.

But fried chicken and caviar, honestly, I ask you.

← ‘The whole community was a client!’: Hackney architects up for prestigious Stirling Prize for Jewish cemetery expansionKings of the Yukon: An Alaskan River Journey – review →